The US Issues New Sanctions After Putin Mobilizes Troops

The U.S. has taken direct action against Russian President Vladimir Putin with new sanctions after he claimed to send “peacekeeping” forces into Ukraine’s eastern breakaway regions.

The sanctions were imposed after Putin formally acknowledged the independent regions of Luhansk and Donetsk as separate from Ukraine.

It was a move criticized by many as a violation of international law and Ukraine’s sovereignty.

“The darkness of uncertainty has fallen,” said Ukraine’s Minister of Defense Oleksii Reznikov’s written statement on Tuesday. “The Kremlin has taken another step towards the revival of the Soviet Union… There are difficult challenges ahead. There will be losses. We will have to go through pain, overcome fear and despair.”

Any response to Putin’s escalating aggression towards Ukraine bears risk in itself. The Biden administration and its European allies are trying to keep diplomatic efforts in motion while deterring Putin from forcefully taking another chunk of Ukraine for Russia.

Western leaders warned that if negotiations with Russia fail, it could lead to the harshest military conflict since World War II.

On Tuesday, Didier Reynders, the European Commissioner for Justice, called Putin’s declaration of Donetsk’s and Luhnask’s independence, along with the deployment of proclaimed “peacekeeping forces” into the regions, an “act of war.”

President Putin ordered Russian troops into the Donbas, calling them peacekeepers. This is nonsense. We know what they really are. In doing so, he has put before the world a choice. We must meet the moment, and we must not look away.

“We know what they really are,” she said during an emergency meeting of the U.N. Security Council on Monday. The ambassador said Russia was attempting to “create a pretext for a further invasion of Ukraine.”

“We are committed to finding a diplomatic resolution that avoids a brutal and costly conflict, but diplomacy cannot succeed unless Russia changes course,” said a U.S. State Department spokesperson.

However, the Biden administration did not back away from plans for Secretary of State Antony Blinken to hold a direct meeting on Thursday with his Russian counterpart, Sergey Lavrov. That meeting is intended to lay the groundwork for Biden and Putin to hold a summit soon after. 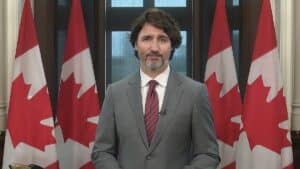