The False Claims of The President's Budget

Should the President succeed in passing his intended policies, the nation will find itself in trillions of dollars more debt with a continued inflation trend

This week the White House released President Biden’s 2023 budget with a fact sheet that appears to be filled with deceptive claims.

Unfortunately, most Americans will not pause long enough to examine the details and comprehend the outlandish claims being made by the proposed budget. As a result, I felt it would be helpful to shed some light on the deceptive assertions that have been issued in the President’s 2023 budget proposal.

The first of those claims is that “the deficit fell last year — by around $300 billion.”

Here is why that claim is deceptive: Due to the COVID pandemic, deficit levels were at historic highs in 2020.

In February 2021, the Congressional Budget Office (CBO) estimated that deficits would be about $2.3 trillion during the fiscal year that ended on Sept. 30. However, the actual deficit for the year came in at nearly $2.8 trillion under Biden’s leadership.

Even though the deficit declined compared to historically high levels in 2020, it ended up about $500 billion higher than projected by the CBO. However, the CBO deficit projections were made before Biden’s spending policies were enacted.

According to the CBO, the 2021 deficit was “nearly triple the shortfall incurred in 2019.”

Another claim of the White House fact sheet says that “as our historic economic and labor market recovery continues, the President’s Budget projects that the deficit in 2022 will be more than $1.3 trillion lower than last year’s — the largest ever one-year decline in our country’s history.”

This is also a deceptive claim.

Before Biden’s policies went into effect, the CBO anticipated that deficits would decrease. In a February 2021 report, the CBO projected a $1 trillion deficit for 2022. However, Biden’s budget projects a $1.4 trillion deficit. This is a 40% higher trajectory than the government had in place prior to Biden’s presidency.

Another claim of the budget fact sheet: “The Budget improves our country’s long-term fiscal outlook while also delivering on the ambitious agenda the President laid out in his State of the Union address.”

When you look at the nation’s Debt to GDP ratio, this claim is false.

The debt-to-GDP ratio has been growing for decades because of fiscal mismanagement by both political parties. In 2019, before the pandemic, debt rose to 79% of GDP.

Government spending on stimulus packages and pandemic-related causes, coupled with the decline in revenue from a lockdown economy, caused the debt to soar beyond 100% for the first time since World War II.

The Biden budget anticipates debt to grow from 102% of GDP in 2022 to nearly 107% by 2032. This increase would surpass the record ratio during World War II.

This is yet another deceptive claim because those increases are dependent on other legislation passing and are coupled with over $5 trillion in spending not included in the President’s budget.

The tax revenue incentives meant to offset spending are part of a modified version of the President’s Build Back Better plan. It aims at pairing $2.4 trillion in new initiatives with $2.1 trillion in offsets over the decade. However, according to the CBO, these new initiatives would cost $5 trillion over the decade and produce $3 trillion in deficits. The Senate has not approved the legislation, stopping the tax revenues and changes from creating any offset in spending.

Not one of these costs appears in the President’s budget proposal.

Instead, a footnote at the bottom of Table S-1 on page 119 states:

“The Budget includes a reserve for legislation that reduces costs, expands productive capacity, and reforms the tax system. While the President is committed to reducing the deficit with this legislation, this allowance is shown as deficit-neutral to be conservative for purposes of the budget totals. Because discussions with Congress continue, the Budget does not break down the reserve among specific policies or between revenues and outlays.”

This trick of excluding the cost of major legislation is what Manhattan Institute’s Brian Riedl calls a “magic asterisk.”

The reality is that President Biden is continuing to press for his significant spending policies, but his budget does not include them.

Should the President succeed in passing his intended policies, like Build Back Better, the nation will find itself in trillions of dollars more debt, with a continued inflation trend. It is important that we pause, examine the details, and understand the impact of the decision of our nation’s leaders. 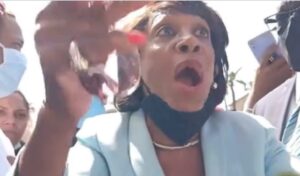