On Thursday, the Biden administration urged Prime Minister Justin Trudeau’s government to use its federal powers to end the trucker protest against the country’s COVID-19 restrictions.

According to the White House, Homeland Security Secretary Alejandro Mayorkas and Transportation Secretary Pete Buttigieg spoke with Canadian leadership, urging them to “use federal powers to resolve” the standoff.

The Freedom Convoy has forced auto plants on both sides of the border to shut down or scale back production.

Protestors blocked the Ambassador Bridge connecting Ontario to Detroit for the fourth straight day. The blockade has disrupted the flow of auto parts and other products between the two countries.

Late Thursday, Trudeau met with leaders of Canada’s opposition. According to him, Windsor’s mayor says the blockade is causing harm to workers and economies on either side of the border.

This evening, I had several meetings that were focused on the illegal blockades and occupations happening across the country. They’re harming the communities they’re taking place in – and they’re hurting jobs, businesses, and our country’s economy. More below ⤵️

Ontario Premier Doug Ford proceeded to cut off funding for the protests by successfully asking a court to freeze millions of dollars in donations to the convoy through crowd-funding site GiveSendGo.

Ford called the protests an occupation.

Canadian officials previously cut off funding from GoFundMe after protest organizers used the site to raise about $10 million. GoFundMe said the fundraising violated the site’s terms of service due to unlawful activity.

Windsor Mayor Drew Dilkens announced the city would seek a court injunction to end the protests.

“The economic harm is not sustainable, and it must come to an end,” he said.

U.S. authorities are bracing for the possibility of a similar protest.

In a bulletin, the U.S. Department of Homeland Security said that it had received reports that truckers are planning to “potentially block roads in major metropolitan cities” across the nation in protest of COVID mandates.

According to Tuesday’s bulletin, the agency said the convoy could begin in Southern California as early as this weekend, possibly disrupting traffic around the Super Bowl.

The White House said the department is “surging additional staff” to the Super Bowl just in case. 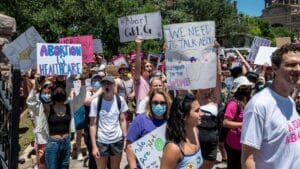