One environmentalist said the announcement was 'good for the climate, which can't handle new oil and gas development'

The Biden administration has canceled some of the most high-profile oil and gas lease opportunities pending before the U.S. Department of Interior (DOI), ending the potential to drill for oil on millions of acres.

The decision halts the potential to drill for oil in the Cook Inlet in Alaska.

“Due to lack of industry interest in leasing in the area, the Department will not move forward with the proposed Cook Inlet OCS oil and gas lease sale 258,” a DOI spokesperson told FOX Business on Thursday.

The DOI Spokesperson noted that additional oil and gas leases would also be halted in the Gulf of Mexico. According to a statement given to CBS News, the DOI ended the two leases for the Gulf of Mexico region because of “conflicting court rulings that impacted work on these proposed lease sales.”

When Biden first took office, he signed an executive order to suspend federal oil and gas leases. Republican-led states challenged the ban, and a federal judge ruled in their favor overcoming the suspension and opening a lease sale for more than 80 million acres in the Gulf of Mexico for oil drilling.

However, environmental protection parties sued to stop that lease sale in federal court and won.

In the ruling, the U.S. District Court for the District of Columbia noted that the Biden administration did not account for the impacts of drilling on climate change and invalidated the sale and the leases. The ruling stopped more resources from being available for domestic energy production.

The administration has continuously noted a lack of domestic oil and gas supply to meet demands. The administration has said this resulted in a surge in prices at the gas pump and increased energy costs for taxpayers. In recent months, they have claimed price hikes have resulted from Russia’s invasion of Ukraine.

However, in early 2021, sources supporting Biden’s climate change initiative consistently stated that the United States had far more than it needed from its domestic oil and gas production. According to the U.S. Energy Information Administration, the United States produced oil and gas in record amounts. They stated that the U.S. was selling more than 25 percent of our daily oil production abroad.

Then, in May, Biden proposed ending tax benefits for oil and gas production. He intended to create roughly $35 billion in tax revenues and created caution for producers to continue the rate of production.

Biden also canceled the Keystone XL’s cross-border permit, ending construction on the pipeline after a 12-year battle to construct the energy superhighway.

On Thursday, Drew Caputo, vice president of litigation for lands, wildlife, and oceans for the environmental advocacy group Earthjustice, told CBS News that this week’s announcement was “good for the climate, which can’t handle new oil and gas development.” 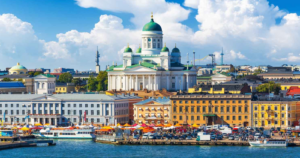 Finland 'Must Apply For NATO Membership Without Delay,' Say President and Prime Minister