The Texas secretary of state’s office announced Tuesday that it will audit election results from 2020 in four counties.

Dallas, Harris, Tarrant, and Collin counties are under review. They are the two largest Democrat and Republican counties in Texas.

In a letter to Abbott, Trump wrote, “You know your fellow Texans have big questions about the November 2020 Elections.”

“We need HB 16, which was just filed in the Third Special Session,” he said. “This legislation specifically addresses the 2020 Presidential Election, and enables audits for future elections. The bill creates a process for candidates and party chairs to initiate an audit, and uses the same language as SB 97, which already passed the Texas State Senate, but did not have enough time to make it through the House during the Second Special Session.”

According to NBC News, “Trump, who has not ruled out running for president again in 2024, has continued to publicly question the results in states he lost by narrow margins — he sent a letter to Georgia Secretary of State Brad Raffensperger last week demanding he decertify his loss there — but the request for an audit in a state he won by a 600,000 vote margin over Joe Biden is a new tactic.”

In a statement, the secretary of state said “a full and comprehensive forensic audit” would be conducted. The office did not specify what the audit would include. The legislature is expected to fund the review, according to a spokesman.

“The secretary of state position, a rare governor-appointed office in the state, is now vacant,” notes the Washington Examiner.

“Let me be the first to congratulate the disgraced former president, Donald Trump, on his apparently becoming the new governor of Texas,” he wrote.

Let me be the first to congratulate the disgraced former president, Donald Trump, on his apparently becoming the new governor of Texas.

Pitiful yet predictable that @GregAbbott_TX has capitulated to Trump yet again. #txlege https://t.co/12PQeJGWtI

House Republican Steve Toth, who is sponsoring a bill that would more easily allow candidates and county chairs to request audits when they are uncertain of election results, thanked Trump for his support. He included the hashtag #AuditAll50States in his post.

In addition to Texas, Arizona, Wisconsin and Pennsylvania are also auditing their 2020 election results. 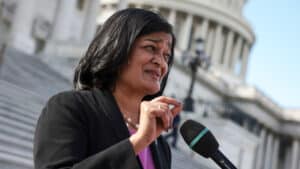 Rep. Pramila Jayapal Tweets—Then Deletes—Claim that US Poverty Rate is ‘4th Highest in the World’