Bexar County, Texas, Sheriff Javier Salazar has opened an investigation into the flight full of migrants that was sent to Martha’s Vineyard last week.

The migrants were flown to the Massachusetts island from San Antonio by Florida Governor Ron DeSantis.

“States like Massachusetts, New York, and California will better facilitate the care of these individuals who they have invited into our country by incentivizing illegal immigration through their designation as ‘sanctuary states’ and support for the Biden administration’s open border policies,” Fenske continued.

On Monday, the sheriff announced a criminal probe is now underway.

“We are opening up a case, an investigation, with regard to the suspected activities involving the 48 migrants from Venezuela,” Salazar said during a press conference on Monday.

In a Facebook post with the livestreamed press conference, the Sheriff’s Office wrote, “Sheriff Javier Salazar has opened up a criminal investigation against individual(s) who lured 48 migrants from the Migrant Resource Center in San Antonio and flown to Martha’s Vineyard.” The post also asked for anyone impacted to contact the office.

The sheriff claimed that the migrants were sent to the elite vacation spot “under false pretenses” and that they were “exploited and hoodwinked into making this trip to Florida and then onward to Martha’s Vineyard for what I believe to be nothing more than political posturing to make a point.”

Governor DeSantis’ office argued that they were not lured and boarded the flight willingly.

“Immigrants have been more than willing to leave Bexar County after being abandoned, homeless, and ‘left to fend for themselves,’” Fenske told The Hill.

“Florida gave them an opportunity to seek greener pastures in a sanctuary jurisdiction that offered greater resources for them, as we expected. Unless the MA national guard has abandoned these individuals, they have been provided accommodations, sustenance, clothing and more options to succeed following their unfair enticement into the United States, unlike the 53 immigrants who died in a truck found abandoned in Bexar County this June.”

Republican governors in Texas and Arizona have also been sending migrants to liberal strongholds, including Washington, D.C., to protest border policies that are overwhelming border states. 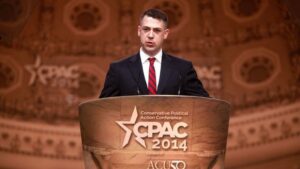