Texas-based Preacher Dillon Awes called for the execution of gays in his Sunday sermon.

On Sunday, Christian hate-preacher Dillon Awes said that the government should execute every gay person. All of them.

“They should be lined up against the wall and shot in the back of the head! That’s what God teaches. That’s what the Bible says.” pic.twitter.com/rMzF3BHSNF

Awes preaches at Steadfast Baptist Church in Fort Worth, Texas, which has been dubbed an anti-LGBT hate group by the Southern Poverty Law Center.

This incident was not the first time the church has been embroiled in controversy.

The church’s Pastor Jonathan Shelley delivered a speech to the Arlington City Council in late May, a week before Pride month, decrying the celebration, suggesting gays are pedophiles, and calling for their death.

“Pride is nothing to be celebrated. In fact, it’s an abomination,” Shelley said.

His three minute address, delivered from a lectern emblazoned with the city’s logo, included quotations from several Bible verses, as well as citations of antiquated Texas laws that banned sexual behavior between individuals of the same sex.

“The Bible’s right, that what these people do is filthy. According to CDC, homosexual men are 230 times more likely to get HIV than straight men. I don’t know why we would promote disease and AIDS in our community,” he said. “Additionally, according to this article of self-reported crimes, the LGBT have an average of 20 to 150 children victims. And including [sic] they commit an average of 154 acts on their victims.”

During Pride 2021, the church released a documentary called The Sodomite Deception, which it says was in response to the United States dramatically shifting its “view from the death penalty to “Drag Queen Story Hour.” 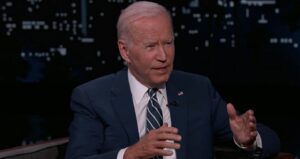 Biden Breaks His 118 Day Streak of No Interviews With Appearance on 'Jimmy Kimmel Live!' — Jokes About Sending Republicans to Jail