In a letter sent to DFPS on Tuesday, Abbot said, “To protect Texas children from abuse, DFPS and all other state agencies must follow the law.”

Under the order, licensed care professionals will be required to report “children who may be subject to such abuse.” The procedures in question include “reassignment surgeries that can cause sterilization, mastectomies, removals of otherwise healthy body parts, and administration of puberty-blocking drugs or supraphysiologic doses of testosterone or estrogen,” the letter states.

In his letter, Abbott noted that licensed care professionals in Texas who directly interact with children, including teachers and doctors, would face criminal penalties if the procedures are not reported.

Abbott further directed DFPS and other state agencies to investigate parents of transgender children. He also asked them to look into the practices of licensed facilities where minors receive sex-change procedures.

Attorney General Ken Paxton said in a formal statement that the procedures are considered child abuse under Texas law. He called the procedures “monstrous and tragic,” saying it is “obvious harm,” in a post on Twitter.

These procedures are monstrous and tragic. “I’ll do everything I can to protect against those who take advantage of and harm young Texans. https://t.co/AOoO5NNmyC

“There is no doubt that these procedures are ‘abuse’ under Texas law, and thus must be halted,” Paxton said. “I’ll do everything I can to protect against those who take advantage of and harm young Texans.”

The Gay and Lesbian Alliance Against Defamation also criticized the Texas governor’s order.

Sarah Kate Ellis, the president of GLAAD, said, “Healthcare is just that — care, and to suggest that trans youth should be separated from their families sends a terrifying and alarming message to kids and parents not just in Texas, but nationwide.” 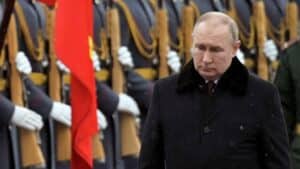 Russia Begins An Attack On Ukraine By Order of Putin