'Cartels are terrorists, and it’s time we treated them that way,' said Abbott

Abbott has openly criticized the Biden administration for not taking more serious action given the serious impact of human traffick, illegal border crossing and drug smuggling, especially the consequences of fentanyl, on the American public.

He designated Mexican drug cartels, including the Sinaloa Cartel and the Jalisco New Generation Cartel, as foreign terrorist organizations on Sept. 21 through an executive order.

“Fentanyl is a clandestine killer, and Texans are falling victim to the Mexican cartels that are producing it,” said Governor Abbott at a roundtable discussion in Midland. “Cartels are terrorists, and it’s time we treated them that way. In fact, more Americans died from fentanyl poisoning in the past year than all terrorist attacks across the globe in the past 100 years. In order to save our country, particularly our next generation, we must do more to get fentanyl off our streets.”

He ordered the Department of Public Safety “to collect intelligence on cartels, investigate gangs that support drug and human smuggling, and to seize goods the cartels are smuggling back to Mexico,” per KRDL Radio Dallas.

“Mexican drug cartels terrorize the United States and its citizens every day, leaving thousands of dead bodies in their wake,” he wrote in a letter on Sept. 21. Abbott included an excerpt of Biden’s Executive Order 14059, which classified the trafficking of illicit fentanyl and other drugs into America a national emergency which has caused “the deaths of tens of thousands or Americans annually.”

Abbott also contrasted data from the National Consortium for the Study of Terrorism and Responses to Terrorism which states that between 1995 and 2019, 3,905 Americans died in terrorist attacks worldwide – the majority of which were recorded on Sept. 11, 2011 – with data from the Centers for Disease Control and Protection that found over 75,000 Americans died from fentanyl-related drug overdoses in the 12 months between February 2021 and February 2022.

“Texas is already doing more than its fair share to stem the tide of fentanyl, not to mention the trafficking and sexual exploitation of women and children, that these cartels inflict. While our Department of Public Safety has seized more than 336 million lethal doses of fentanyl since March 2021—enough to kill every man, woman, and child in the U.S.—our nation needs the federal government to protect Americans from foreign threats, too,” wrote the governor.

“As the number of American deaths continues to rise due to the cartels’ terrorist behavior, now is the time to act,” said Abbott. “We do not have more time to waste.”

Abbott has increased his efforts to draw attention to the illegal immigration crisis at the US-Mexico border in recent years.

In March  2021, Abbot launched Operation Lone Star – an integrated effort overseen by the Texas Department of Public Safety to stop human trafficking and drug smuggling. With support from the Texas National Guard, the program authorized the DPS to deploy “air, ground, marine, and tactical border security assets to high threat areas to deny Mexican Cartels and other smugglers the ability to move drugs and people into Texas.”

Abbott authorized the Texas National Guard to arrest people who were illegally crossing the border in August 2021. Over 200,000 migrants were encountered at the border the month before. He also made border security funding a priority for the state’s legislative session, per Fox News.

“The crisis at our southern border continues to escalate because of Biden Administration policies that refuse to secure the border and invite illegal immigration,” said Governor Abbott during the launch of Operation Lone Star. “Texas supports legal immigration but will not be an accomplice to the open border policies that cause, rather than prevent, a humanitarian crisis in our state and endanger the lives of Texans.” 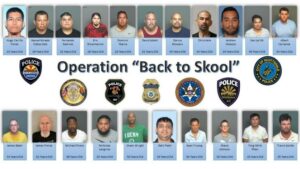