According to the Associated Press, a Tesla driver in California has been charged with two counts of vehicular manslaughter after a crash that killed two people while his car was using Autopilot.

It appears to be the first time a driver using semi-automated driving technology has been charged with a felony related to a deadly crash. In October, California state prosecutors filed charges against the driver, Kevin George Aziz Riad. However, the case details were only recently released.

The fatal accident occurred in a Los Angeles suburb in December 2019, when Riad’s Model S sedan left the freeway, ran a red light, and crashed into a Honda Civic, according to police reports. Two occupants of the Honda were killed. The victim’s families are also suing Tesla and Riad separately from the criminal charges.

Riad pleaded not guilty to the criminal charges and is currently free on bail.

A preliminary hearing in the criminal case is scheduled for February 23, court documents show.

According to the AP report, prosecutors in the case did not mention Autopilot. However, the National Highway Traffic Safety Administration (NHTSA) confirmed the technology was engaged during the crash.

There has been ongoing concern about Autopilot, Tesla’s advanced driver-assistance system. The system utilizes an array of cameras to maintain speed, follow curves in the road, and keep a set distance from other vehicles.

Autopilot itself does not make the Tesla vehicles autonomous. Critics say it’s too easy to abuse by not paying attention to the road.

Safety advocates have said that Tesla’s Full Self-Driving technology is misleading and overstates its capabilities, leading to safety concerns for owners and other drivers.

NHTSA has been investigating Autopilot’s shortcomings. Currently, it is reviewing about a dozen accidents where Teslas with driver-assistance features being utilized were involved in a crash.

The family of a 15-year-old boy killed in a similar crash is currently suing Tesla, alleging that Autopilot was partially to blame.

Tesla has not issued a statement concerning this latest case. The company has said that drivers should pay full attention when Autopilot is engaged. 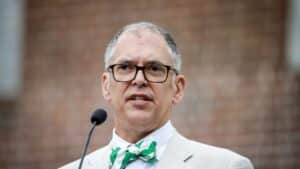