Tennessee Gov. Bill Lee has added a penalty measure to a state law that bars transgender athletes from competing on sports teams that do not match their biological sex.

House Bill 1895 will allow the state to withhold funding from schools that fail to verify a student’s sex assigned at birth before allowing them to participate on a gendered sports team.

The measure states that Tennessee’s education commissioner must “withhold a portion of the state education finance funds” from schools that do not verify athlete’s biological sex using their original birth certificate. An exact amount to be withheld was not specified.

The penalty is meant to strengthen a law that Gov. Lee signed last year which requires students over fourth grade to produce documentation about their biological sex in order to participate on gendered sports teams.

“There was no requirement for enforcement, no penalty for non-enforcement,” Rep. Joey Hensley, who sponsored both the original legislation and the penalty measures, said according to a report from the Tennessean. “This bill just sets up a penalty.”

Hensley has been outspoken about “setting a level playing field for all of our female athletes.”

“We have seen it happening in other states,” Hensley said. “I don’t know of a personal example in Tennessee, but we don’t want it to happen in Tennessee and our female athletes to have unfair competition.”

The new law goes into effect on July 1.

Lambda Legal, the American Civil Liberties Union, and the ACLU of Tennessee have filed a lawsuit challenging last year’s law on behalf of 14-year-old Luc Esquivel, a transgender golfer and freshman at Farragut High School in Knoxville, TN.

“There is endless research demonstrating the short-term and long-term benefits that flow from participating in team sports for kids growing up,” Sasha Buchert, senior attorney at Lambda Legal, said in a press release. “For trans kids, who often experience alienation and stigmatization, participating on teams with their peers is especially important. Luc just wants to play golf with other boys, to be part of the team, and to improve his game. Like all kids, he just wants to play.”

A trial for Esquivel’s case has been tentatively set for March 2023.

Tennessee lawmakers are also working on a separate bill that will ban biological male athletes from competing on women’s teams at the college level. The legislation cleared the state senate on Monday and is now moving to consideration by the House finance subcommittee.

According to a report from the Associated Press, Tennessee has passed more laws regarding transgender people than any other state in the nation.

“Tennessee this year banned transgender athletes from playing girls public high school or middle school sports. The state is poised to become the first to require government buildings and businesses that are open to the public to post signs if they let trans people use multi-person bathrooms and other facilities associated with their gender identity,” the report says. “Public schools, meanwhile, will soon risk losing lawsuits if they let transgender students or employees use multi-person bathrooms or locker rooms that do not reflect their sex at birth. Lee also signed legislation to require school districts to alert parents 30 days before students are taught about sexual orientation or gender identity, letting them opt out of the lesson.” 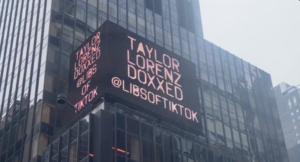