A 15-year old and three others, including a police officer, were shot during a Juneteenth music event in DC on Sunday evening.

The teenage boy did not survive. The other victims are said to be in stable condition.

The event was called “Moechella,” and DC Metropolitan Police Chief Robert Contee said that the outdoor event was “unpermitted.”

“We certainly want to make sure people are held accountable when they hold unpermitted events in our city,” Contee told reporters on Sunday night. “This is one of the reasons why.”

A number of people are down on 14th and U #DC after #moechella. There were entirely too many unsupervised young people. Glad we decided to watch from the rooftop. pic.twitter.com/0EnDIqXI3H

A witness said that the teenage shooting victim was calling out for his mom during his final moments.

“He was screaming out for his mom,” Daniel Dyson told WTTG. “And it’s hurtful to hear that man. And no one was able to help him.”

Dyson continued, “To see him go. It bothers me. All of this that’s going on here it bothers me. And it needs to come to a stop. It really does.”

Daniel Dyson witnessed the U St shooting after the #moechella festival. He says he was standing right next to the officer who was shot. A 15-year-old boy was killed, according to @DCPoliceDept. We’re live on @fox5dc at 11 pic.twitter.com/FQfhIDkzJP

“I was sitting next to a cop. Next thing you know, shots rang out,” Dyson said. “He did not want to stay down. He proceeded on. He was shot in the leg. And he kept moving. He went to the fire. He did not run away.”

Police had shut down the event prior to the shooting — after a fight caused a stampede, leading to people being trampled and injured.

Sent in from the community. Earlier today at around 6:40 pm on 14th street this also happened where folks started running in fear of possible gun shots. pic.twitter.com/a3AwslXY26

There were roughly 100 police officers at the event during the time of the shooting, according to Contee.

The Chief said that multiple firearms were recovered by police, including from one of the shooting victims. He said he did not believe that the gun found on the victim was used, as there was no exchange of gun fire.

Chief Contee and city officials provide an update regarding a shooting with multiple victims shot, including an MPD officer, that occurred this evening in the area of 14th and U Street, NW. https://t.co/j2w5yXqvPZ

Videos of the crowd during and after the shooting featured attendees surrounding emergency vehicles — and in some cases, “twerking” on top of them.

Video recorded after the deadly shooting at the #Moechella black music festival to celebrate #juneteenth. Attendees shut down the road and twerked on vehicles they had surrounded. The event was advertised as a “peaceful demonstration.” pic.twitter.com/XoW28zNJHJ

DC Mayor Muriel Bowser held a press conference after the incident and made similar remarks to Chief Contee, “we have a child who was killed today at an event that did not have any proper planning.”

“We need some accountability here.”

No suspects were in custody as of Monday morning and police have not named a suspect. 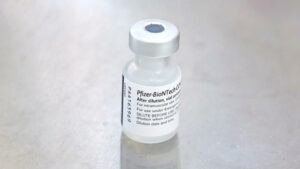