Biden, who has been out of the office all weekend, blamed President Trump for the botched military withdrawal from the nation

Thousands at the airport in Kabul attempted to flee the country after the Taliban took control of the capital city.

Hamid Karzai International Airport was overrun by Afghans, who were caught by news crews and on cellphone footage, swarming the tarmacs in a “desperate rush to escape the country, which is now overrun by Taliban militants in the lead-up to the complete departure of U.S. forces,” says CNBC.

This is, perhaps, one of the saddest images I've seen from #Afghanistan. A people who are desperate and abandoned. No aid agencies, no UN, no government. Nothing. pic.twitter.com/LCeDEOR3lR

NBC’s Chief Foreign Correspondent Richard Engel shared a video of men clinging to a plane evacuating Americans from the embassy.

The desperation is complete. Afghans don’t want to be left behind as US evacuates. pic.twitter.com/efZgNcyzpU

In a phone interview with CNBC, Kamal Alam, a nonresident senior fellow at the Atlantic Council and senior adviser to the Massoud Foundation, said “No one can really leave. If you don’t have a visa or passport, which the majority of Afghans don’t, you’re not going.”

High-ranking Afghan officials have fled the country, including President Ashraf Ghani. He is reportedly now in Uzbekistan. The country’s elite were able to fly out first, in many cases on private planes, taking significant amounts of cash with them.

Over 6,000 soldiers from the United States arrived over the weekend to evacuate Western diplomats.

State Department spokesperson Ned Price said in a statement Monday, “We can confirm that the safe evacuation of all Embassy personnel is now complete. All Embassy personnel are located on the premises of Hamid Karzai International Airport, whose perimeter is secured by the U.S. Military.”

The evacuation came just five weeks after President Joe Biden said, “There’s going to be no circumstance where you’re going to see people being lifted off the roof of a [sic] embassy of the United States from Afghanistan.”

During the July 8 press conference when he made this declaration, Biden repeatedly blamed President Trump for the nation’s takeover. He denied that his intelligence community warned him that the Afghan government would likely collapse if there was a total and swift withdrawal.

“The militant Islamic group was able to seize nearly all of Afghanistan in a little over a week – a stunning feat after the billions spent by the U.S. and the North Atlantic Treaty Organization (NATO) over two decades to build up Afghanistan’s security forces,” reports The Daily Mail.

On April 14, Biden announced U.S troops would be withdrawn from Afghanistan between May 1 and September 11. The previously withdrawn deadline had been May 1.

Taliban fighters launched a major offensive on May 4 against Afghan forces in the southern Helmand province. They also attacked at least six other provinces. Violence continued to escalate through June as fighting was reported in 75% of the nation’s provinces. By July 21, half of the country’s districts were under Taliban control.

In just one week, the Taliban took control of almost every major city across the country, including  Kandahar, the country’s second city and spiritual home of the Taliban on August 13, and Jalalabad, without a fight on August 15.

Biden claims Trump set the stage for this crisis, telling reporters in July, “Shortly before he left office, he also drew U.S. forces down to a bare minimum of 2,500 … Therefore, when I became President, I faced a choice — follow through on the deal, with a brief extension to get our forces and our allies’ forces out safely, or ramp up our presence and send more American troops to fight once again in another country’s civil conflict.”

“I was the fourth President to preside over an American troop presence in Afghanistan — two Republicans, two Democrats. I would not, and will not, pass this war onto a fifth,” he said.

“The White House has no discernible plan other than pleading with the Taliban. The bungled withdrawal, reminiscent of his failed withdrawal from Iraq, is an embarrassment to our nation,” he said in a statement. “President Biden must continue to provide the close air support necessary for the Afghan government to protect themselves from the Taliban and make sure al Qaeda and ISIS do not gain a foothold due to the Biden administration’s disastrous policies.”

“It is time for Joe Biden to resign in disgrace for what he has allowed to happen to Afghanistan, along with the tremendous surge in COVID, the Border catastrophe, the destruction of energy independence, and our crippled economy,” President Trump said in a statement on Sunday.

He said in an email to his supporters, “Joe Biden gets it wrong every time on foreign policy, and many other issues. Everyone knew he couldn’t handle the pressure … He ran out of Afghanistan instead of following the plan our Administration left for him — a plan that protected our people and our property, and ensured the Taliban would never dream of taking our Embassy or providing a base for new attacks against America.”

President Biden and First Lady Jill spent the weekend at Camp David. While originally scheduled to return to Washington D.C. on Wednesday, the administration has announced Biden will return on Monday instead. 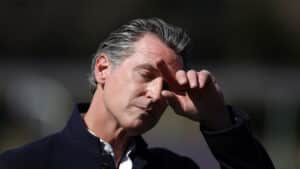 TOTAL RECALL: California Voters Split on Whether Newsom Should Be Removed