On Wednesday, former President Donald Trump reacted to Republicans voting against Kevin McCarthy in his bid for Speaker of the House.

“Some really good conversations took place last night, and it’s now time for all of our GREAT Republican House Members to VOTE FOR KEVIN, CLOSE THE DEAL, TAKE THE VICTORY, & WATCH CRAZY NANCY PELOSI FLY BACK HOME TO A VERY BROKEN CALIFORNIA,THE ONLY SPEAKER IN U.S. HISTORY TO HAVE LOST THE ‘HOUSE’ TWICE! REPUBLICANS, DO NOT TURN A GREAT TRIUMPH INTO A GIANT & EMBARRASSING DEFEAT. IT’S TIME TO CELEBRATE, YOU DESERVE IT,” Trump said on Wednesday.

“Kevin McCarthy will do a good job, and maybe even a GREAT JOB – JUST WATCH!”

“If Republicans are going to fight, we ought to be fighting Mitch McConnell and his domineering, China loving BOSS, I mean wife, Coco Chow,” the former President shared to Truth Social Wednesday morning. “The harm they have done to the Republican Party is incalculable. Today, he couldn’t be elected ‘Dog Catcher’ in Kentucky (Sadly, he only won because of my Endorsement, went up 21 points – SORRY!).”

“TAKE THE VICTORY AND RUN!!!” Trump followed up shortly after.

Supporting McCarthy is the worst Human Resources decision President Trump has ever made.

“There is so much unnecessary turmoil in the Republican Party, in large part do [sic] to people like the Old Broken Crow, Mitch McConnell, his ‘wife,’ Coco Chow, who is a sellout to China, and their RINO allies, who make it difficult for everyone else by constantly capitulating to Hopeless Joe Biden and the Democrats,” the former President posted Tuesday following the Speaker vote. “The 1.7 Trillion Dollar Green New Deal ‘booster’ that McConnell and the RINOS handed to the Dems last week was a real downer and embarrassment to Republicans!”

On Tuesday, Gaetz sent a letter to the Capitol Architect alleging McCarthy was occupying the House Speaker’s office, suggesting the Republican Leader was “occupying” and “squatting” in the office after losing three Speaker votes.

“I write to inform you that the Speaker of the House Office located in the U.S. Capitol Building is currently occupied by Rep. Kevin McCarthy. As of this morning, the 117th Congress adjourned sine die, and a Speaker from the 118th Congress has not been elected,” Gaetz wrote to Capitol Architect J. Brett Blanton. “After three undeciding votes, no member can lay claim to this office.”

“What is the basis in law, House rule, or precedent to allow someone who has placed second in three successive speaker elections to occupy the Speaker of the House Office?” the Florida representative continued. “How long will he remain there before he is considered a squatter?” 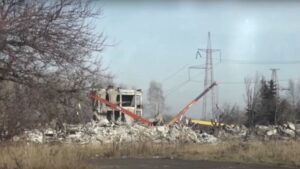