The suspect in a machete attack on three New York City Police Department officers in Times Square on New Year’s Eve was reportedly on the FBI’s terror watch list.

Trevor Bickford, 19, was interviewed by the FBI just weeks before the attack.

Bickford arrived at the Times Square checkpoint at West 52nd Street and 8th Avenue around 10 p.m. on New Year’s Eve. When he arrived at the screening point, where police were checking for suspicious items and weapons, he left his backpack containing a diary with his will. An entry dated December 31, 2022, began with “this will likely be my last entry” before explaining his burial wishes and how he wanted his property divided.

The suspect’s writings criticized his brother for joining the US military and explained that he wanted to join the Taliban.

“There was a time when we were close, but that time has since passed,” a diary entry reportedly said of his brother. “You have joined the ranks of my enemy.”

While still in the security area, Bickford pulled out a machete and attacked the three officers. He was subsequently shot in the arm.

None of the injuries to the officers or the suspect were fatal.

CNN reports that “Bickford was interviewed by FBI agents in Maine in mid-December after he said he wanted to travel overseas to help fellow Muslims and was willing to die for his religion, according to multiple law enforcement sources.”

The report says that Bickford’s mother and grandmother were so worried about his desire to go to Afghanistan and join the Taliban that they reported him to the Wells, Maine, police department on December 10.

“When the FBI opened its wider investigation they also placed him on a terrorist watch list, according to sources. Because the Taliban is not designated a foreign terrorist entity, planning to travel to Afghanistan to join the group does not constitute the federal crime of “attempted material support of a terrorist group,” the report continued. 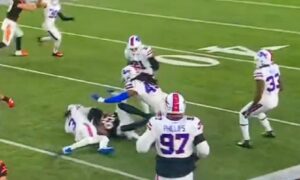