Justice Sonia Sotomayor rejected the emergency appeal on Friday, foregoing the usual practice of issuing an opinion on her ruling

On Friday, the Supreme Court turned down an appeal from a group of New York City school teachers who sought to block a COVID-19 vaccine mandate, arguing it violated their religious freedom.

Justice Sonia Sotomayor rejected the emergency appeal on Friday. The rejected appeal came on the same day as the deadline for city employees to comply with the mandate or be fired.

Sotomayor did not offer a written explanation, despite the fact that the court’s general practice is for justices to hear arguments, make a decision, and issue an opinion in writing.

Fifteen Department of Education workers filed the appeal on Tuesday. The workers claim the city is violating their religious freedoms by not accepting their exemption claims.

The city requires that religious leaders back up religious exemption requests. For example, the teachers said the city would not accept an exemption from Catholics because Pope Francis had urged church members to be vaccinated.

The city previously chose to allow exemptions for medical or religious reasons, but the concession was made after multiple appeals to the vaccine mandate issued by former Mayor Bill de Blasio.

This week, mayor Eric Adams said he would move forward with terminating nearly 4,000 of the city’s roughly 400,000 employees who were not vaccinated. 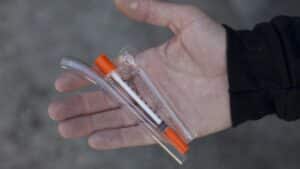