CNN, ABC and The New York Times all signed a motion challenging the DOJ's pursuit of a protective order

A coalition of major media companies has submitted a legal brief supporting Steve Bannon’s effort to publish more than 1,000 pages of documents relating to the events of Jan. 6.

The Department of Justice is seeking a protective order that would prohibit the former advisor to President Donald Trump from publishing any documents or information relating to Jan. 6.

The documents, which the federal government would have to share as part of the discovery process, include more than 1,000 pages of witness testimony, grand jury material, and emails from the staff members of those on the House Jan. 6 Committee.

The government has argued that Bannon’s use of the materials could taint the jury pool through the inevitable pretrial publicity.

Major media companies, including CNN, ABC, NBC, The Washington Post, The New York Times, and The Wall Street Journal, signed on to a motion criticizing the DOJ’s actions.

The move violates the First Amendment, the group says.

“Proper justification for a gag order necessarily includes a finding, in absence of its entry, that no ‘less restrictive alternatives’ can adequately prevent the perceived harm,’” reads the filing with was obtained by The Daily Mail. Furthermore, the order “would prohibit Bannon and his counsel from communicating with the press and public about any materials that the Government provides during discovery – not just materials that the Government properly deems ‘sensitive.’”

The group also said Bannon “’has demonstrated his desire to communicate with the press and public about the Government’s case against him.”

Prosecutors disagreed with the media companies and instead accused Bannon of trying to use publicity to subvert his case.

“Allowing the defendant to publicly disseminate reports of witness statements will have the collateral effect of witness tampering because it will expose witnesses to public commentary on their potential testimony before trial and allow a witness to review summaries of other witnesses’ statements recounting the same event or events,” they wrote.

“The defendant wishes to have trial through the press,” prosecutors wrote in their 10-page response to Bannon’s legal team’s opposition to the protective order. “The Court should exercise its oversight authority and enter the attached proposed order to preclude the defendant from widely disseminating non-public information he receives through the discovery process and inflicting the harms described above.”

Bannon was held in contempt after refusing to comply with subpoenas from the House Jan. 6 Committee after he failed to appear in front of the committee and did not submit requested documents. He surrendered into government custody in November.

A judge will revisit the trial schedule during a Dec. 7 hearing. 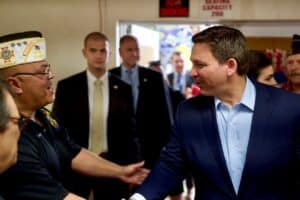 DeSantis Calls for a New Florida Military Force He Would Control