A Staffordshire University criminology professor is being investigated for Twitter posts asserting his belief that prisons should be single-sex.

The university received an anonymous complaint that the professor’s posts were “transphobic.”

Criminologist Professor James Treadwell had shared his belief that trans-women should not be placed in women’s prisons. He cited research from the organization Prison Reform Trust that found over half of women in prison have experienced domestic or sexual violence.

“Many [women] have been damaged by men time and again. I cannot see any case for now why we should do anything but #KeepPrisonsSingleSex,” Treadwell tweeted.

Been off twitter today, family time. But this is important, over half of female prisoners have experienced sexual violence and abuse. Many have been damaged by men time and again. I cannot see any case for now why we should do anything but#KeepPrisonsSingleSex https://t.co/IsXSM1onol

The Daily Mail reports that “earlier this month, Professor Treadwell was accused of ‘trying to link’ reform to the Gender Recognition Act – which allows people with gender dysphoria to change their legal gender – with ‘sex criminals’ after he penned a lengthy Twitter thread about sex offenders. However, the thread made no reference to transgender people.”

Treadwell announced that he is being investigated for the tweets on Twitter, adding “cancel culture is just a myth though, right.”

Ok to hell with it. I have been told by my employer @StaffsUni albeit only verbally that I am being investigated for Transphobia after formal and official complaints about my Twitter conduct. Read my tweets. Go figure. It’s a good job cancel culture is just a myth though, right. https://t.co/Lstt2CypzM

“I am angry and upset. Not only do I have no details of what it is alleged, I honestly have tried to be balanced and reasonable and promote fair debate. Lete be clear again, Trans people like all people deserve dignity and respect. Academics giving their personal views do too,” Treadwell added in the tweet thread.

This is where we are at in debates now. This is the landscape academics operate in. I am a pretty legally savvy one who tries to act respectfully and decently. Hell yes I can be brusk, opinionated and stubborn. But I respect anyone’s right to disagree and hold a different view.

Treadwell continued, “Oddly literally nobody has approached me directly to debate my stance or views. They have clearly however gone to my employer wanting me sanctioned or sacked. Nice to know that this is how open and inclusive the politics is.”

But we have entered a place where that isn’t enough. Oddly literally nobody has approached me directly to debate my stance or views. They have clearly however gone to my employer wanting me sanctioned or sacked. Nice to know that this is how open and inclusive the politics is.

Treadwell concluded his thread by writing, “If this can happen to me it can happen to any of you. It can certainly happen to younger ECRs and others at the start of their career. Universities want us on social media, but is your back covered? Who has it?”

A university spokesperson confirmed to the Daily Mail that there is an investigation underway and that they are committed to “equality, diversity and inclusion” as well as “academic freedom.” 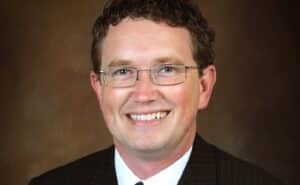 Rep. Thomas Massie Says His Office Will Not Comply With DC Vaccine Mandate