In a memo to its employees, RT America cited “unforeseen business interruption events”

RT America has announced it will stop production and be laying off most of its staff.

In a memo to staff that was obtained by CNN, the company cited “unforeseen business interruption events” and stated it would be “ceasing production” at every location, including its bureaus in Los Angeles, Miami, New York and Washington, DC.

“Unfortunately, we anticipate this layoff will be permanent, meaning that this will result in the permanent separation from employment of most T&R employees at all locations,” Misha Solodovnikov, the general manager of T&R Productions wrote.

BREAKING: RT America is ceasing productions and laying off its staff, according to a memo I have obtained from the production company behind the Russia-backed network. https://t.co/l2wcGA85Zg

A journalist from RT America, who asked to remain anonymous, confirmed the authenticity of the report to Timcast. The journalist was not sure what the “unforeseen business interruption events” were referred to by the network.

“These are the people who censored a sitting president,” the journalist said. “I’m honestly not surprised they’re nuking their entire model of global hegemony from orbit (metaphorically speaking).”

Employees at the D.C. bureau were told there would be an all-staff meeting on March 3. According to CNN’s report, the staff was informed of their termination at that time and offered two months of severance pay.

“Formerly known as Russia Today, RT has several sister stations around the world,” notes Mediaite, including the United Kingdom and France.

Normally, I would have some sympathy for the people losing their jobs but I'm making an exception in this case. https://t.co/uTlItl0bc5

Now ensure none of the "journalist" liars and propagandists never work in media again. https://t.co/UxlAPavOnL

Tara Reade, the former Senate staffer who accused President Joe Bide of sexually assaulting her in 1993, is a contributor for RT America.

She thanked the network for publishing her OpEd detailing her experience after making her accusation.

This OpEd describes what Biden and his team did to silence my history with him. Read please.

I thank RT for listening to survivors.

America's demonization project against me is complete https://t.co/cRHGzT9Da2

The request was unanimously adopted by the House.

The effective closure of RT America coincided with an announcement from RT that it will broadcast all of its news networks through Rumble after it was blocked on other platforms, including Twitter, Meta, and Roku, following Russia’s invasion of Ukraine. 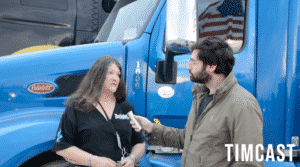