South Africa is at the center of the COVID-19 omicron outbreak after scientists identified the variant last week.

Within two weeks of the identification of the first case, the variant had spread across the globe — triggering new concerns and regulations.

“Patient zero, called n=1 or the index case by the scientific community, arrived at Hong Kong International Airport on 11 November, having flown in from South Africa via Doha in Qatar, on flight QR818,” reports Sky News. “He had been in South Africa for almost three weeks, and had tested negative the day before he began his trip there.”

The man tested negative upon his arrival, before beginning his mandatory hotel quarantine. On the second day, Nov. 13, he was found to have a high viral load and was sent to the hospital the following day.

A second man, who arrived the day before patient zero and was in isolation in the same hotel, was discovered to have a high viral load on Nov. 18. He was subsequently hospitalized.

The cases coincided with an increase in cases in the South African province of Gauteng, which were noticed during routine tests. The variant was identified in samples collected between Nov. 14 and Nov. 16.

On Nov. 24, the new specimen type had been labeled B.1.1.529 and reported to the World Health Organization. The WHO referred to the specimen as a “variant of concern.”

“Most of the new cases in South Africa have been among people in their 20s and 30s, and doctors note that age group generally has milder symptoms of COVID-19 in any case,” reports AP News. “They warn that older people infected by the new variant could have more severe symptoms.”

Countries across the world have taken new actions in the wake of the omicron’s global spread.

Dutch authorities said over 60 passengers on a flight from South Africa on Nov. 26 tested positive for COVID-19. Of those, 13 were identified as the omicron variant.

At a press conference in Rotterdam, Netherlands, Health Minister Hugo de Jonge said, “It is not unlikely more cases will appear in the Netherlands. This could possibly be the tip of the iceberg.”

“Britain has already put six African countries, including South Africa, Namibia, Lesotho, Botswana, Eswatini and Zimbabwe, on its red list – which means arriving travelers have to quarantine for 10 days in a government facility,” per The New York Post.

Addressing the omicron variant on Nov. 29, President Joe Biden praised the South African scientific community for quickly and transparently notifying the world about the variant.

Biden took steps to restrict travel from southern Africa in order to “slow the speed” at which omicron spreads.

“It gives us time,” Biden said. “Sooner or later we’re going to see cases of this new variant here in the United States. This variant is a cause for concern, not a cause for panic.”

Biden said the “best protection” against omicron or any COVID-19 variant is to get vaccinated. He called on adults over the age of 18 who got vaccinated before June 1 to get a booster shot.

“A fully vaccinated booster person is the most protected against COVID,” he said.

Biden told reporters that he expects the new normal to include “everyone getting vaccinated and the booster shots.”

He noted that Dr. Anthony Fauci and his administration’s medical team could not yet be certain but expected the vaccines offered some protection against the new variant.

“I am sparing no effort in removing all roadblocks to keep the American people safe, ” Biden said. 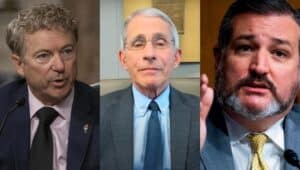