Six people, including a 17-year-old and her 6-month-old baby, have been massacred by two gunmen in a California home.

Tulare County Sheriff Mike Boudreaux said during a press conference that the mass murder took place in a Goshen home at approximately 3:30 a.m. on Monday morning.

Boudreaux believes that the killings have the hallmarks of a drug cartel attack.

“I think it’s specifically connected to the cartel,” Sheriff Boudreaux told The Los Angeles Times. “The level of violence … this was not your run-of-the-mill, low-end gang member.”

A search warrant was served at the property last week that had turned up guns, marijuana, and methamphetamines, which were seized by law enforcement. One person was also arrested at that time.

Police arrived at the scene after someone reported hearing many gunshots.

When officers arrived, they found an elderly woman deceased in a bed after being shot in the head.

“It appeared she was shot in her sleep,” Boudreaux said.

The dead seventeen-year-old mother was cradling her baby in a ditch outside the home, and both of them had also been shot in the head.

Sheriff Boudreaux said that he believes the assassins were experienced killers, though he has not named any suspects.

Two women at the property survived by seeing the figures on a security camera and hiding in a trailer.

The Times reports, “it was unclear whether the man arrested last week during the search by a gang and narcotics unit of the county Sheriff’s Office was one of the victims, Boudreaux said. DNA testing will be required to identify at least one of the male victims because of damage done to his face by the gun or guns used, the sheriff said.” 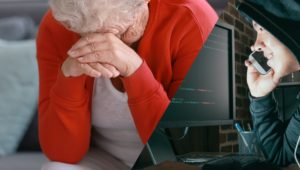 Texas Man Admits To Scamming Seniors In 11 States Out Of $1.6 Million