A single mother of five from Blairsville, Georgia, now faces one year in prison after allowing her 14-year-old daughter to babysit her siblings while she went to work at the beginning of the COVID-19 pandemic.

Melissa Henderson is charged with criminal reckless conduct after leaving her children in the care of her eldest child, 14-year-old Linley, in May 2020. Henderson made the decision to leave her children with their older sibling after COVID mandates shut down their schools and daycare center.

After Henderson left for work, Linley was engaged in online schooling and failed to notice that her four-year-old brother, Thaddeus, left the house when he saw his friend outside playing and went to join him.

After about 15 minutes, Linley noticed he was missing and located him at his friend’s house down the street.

According to details of this story, covered by Reason Magazine, the other child’s mother took Thaddeus inside and reported the incident to the police.

Police initially took down Henderson’s information and about a week later, the local police returned with multiple units and charged her with reckless conduct.

“They handcuffed me, drove me to jail, booked me, had me put in a cell. It was awful. It was embarrassing,” she told Fox News.

Henderson was arrested in front of her five children, an experience she said left her feeling “hopeless.”

After the arrest, Deputy Sheriff Marc Pilote discovered that Thaddeus had previously wandered outside while his sister was babysitting before.

He wrote in his arrest report that anything terrible could have happened to Thaddeus after wandering out, including being kidnapped, run over, or “bitten by a venomous snake.”

Henderson faces a maximum penalty of one year in prison and a fine of $1,000 if she is convicted.

Criminal proceedings have now been ongoing for two years.

David DeLugas, the founder of ParentsUSA, is representing Henderson pro bono. He said that Georgia’s own child protective guidelines state that children can babysit at age 13 with a parent’s permission.

Henderson says she is afraid to leave her children alone, and DeLugas said she has not returned to work since her arrest.

A GoFundMe has been set up for Henderson’s legal expenses. As of Wednesday, it had raised over $18,000. 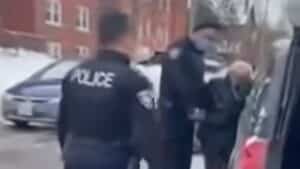 WATCH: 78-Year Old Man Restrained and Ticketed For Honking In Ottawa In Support of Freedom Convoy