Shell Announces It Will No Longer Purchase Russian Oil and Gas

On Tuesday, energy giant Shell said it would stop buying Russian oil and natural gas and close its gas stations, shut off aviation fuels, and end all other operations in Russia as a response to the invasion of Ukraine.

The decision comes as surging oil prices have unnerved global markets, sending gas prices to record highs not seen since 2008. Still, there is mounting pressure from the public and the U.S. Government on large corporations to restrict or end business relationships with Russia.

In a statement, Shell said that it would withdraw from all Russian hydrocarbons, including crude oil, petroleum products, natural gas, and liquefied natural gas in multiple phases.

“We are acutely aware that our decision last week to purchase a cargo of Russian crude oil to be refined into products like petrol and diesel — despite being made with security of supplies at the forefront of our thinking — was not the right one, and we are sorry,” said Shell’s CEO Ben van Beurden in the company’s statement Tuesday.

Ukrainian Foreign Minister Dmytro Kuleba said he was told Shell “discretely” bought the oil Friday, calling on the company and other international firms to halt such purchases.

“One question to Shell: doesn’t Russian oil smell (like) Ukrainian blood for you?” Kuleba said on Twitter.

I am told that Shell discretely bought some Russian oil yesterday. One question to @Shell: doesn’t Russian oil smell Ukrainian blood for you? I call on all conscious people around the globe to demand multinational companies to cut all business ties with Russia.

Last week, Shell said it was “shocked by the loss of life in Ukraine” and said it would terminate its joint ventures with Gazprom, the oil and gas company owned by the Russian government.

Shell’s decision to end investments in Russian energy comes as the White House and Congress consider banning Russian oil imports. In 2021, about 8% of U.S. oil imports came from Russia.

ExxonMobil mobile announced last week that it was closing its operations in Russia. Exxon said it plans to exit the Sakhalin-1 project, an oil and gas operation on Sakhalin Island in Russia’s Far East. The energy company is also ending new investments in Russia. 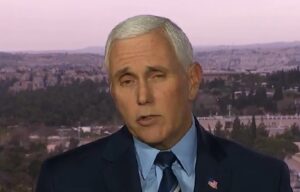 Pence Suggests He May Consider 2024 Run For President