A 71 percent majority of Americans do not want President Joe Biden running for re-election.

The Harvard CAPS–Harris Poll found that out of those who do not want him to seek a second term, 45 percent cited him being a “bad” president, while roughly one-third said he is too old and a quarter said because it is “time for a change.”

The survey results were provided exclusively to The Hill.

The pollsters found that just 30 percent of Democrats would vote for Biden in a presidential primary.

“President Biden may want to run again but the voters say ‘no’ to the idea of a second term, panning the job he is doing as president. Only 30 percent of Democrats would even vote for him in a Democratic presidential primary,” Mark Penn, the co-director of the Harvard CAPS-Harris Poll survey, said in a statement to the outlet.

The majority of respondents, 61 percent, also do not want to see former President Donald Trump run again in 2024.

Just 39 percent said that they would like Trump to run again.

“Among the respondents polled who believe Trump should not make another bid in the next presidential cycle, 36 percent said Trump was erratic, 33 percent said he would divide the country and 30 percent said he was responsible for Jan. 6, 2021, when a mob of pro-Trump supporters ransacked the Capitol in an effort to stop Congress from certifying the election results,” the Hill reports.

The report added, “a majority of those polled said they would consider a moderate independent candidate should Biden and Trump square off against each other in 2024, including majorities of both Republicans and Democrats polled.”

Forty percent of those polled said that they would not consider a moderate independent candidate if Trump and Biden go head to head again in 2024.

However, the survey found that majorities of both parties — 53 percent of Republicans and 64 percent of Democrats — said they would consider a moderate independent candidate if those two are the options for the major parties.

The Harvard CAPS/Harris Poll survey was conducted on June 28 and 29 with 1,308 registered voters surveyed. It is a collaboration of the Center for American Political Studies at Harvard University and the Harris Poll. 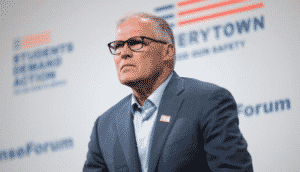