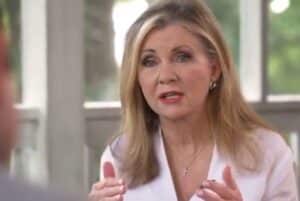 Tennessee Senator Marsha Blackburn took aim at Taylor Swift in a recent interview, saying that the pop icon would be the “first victim” of a Marxist government.

Swift has frequently spoke out against Blackburn, including during one of her first endorsements. The singer endorsed Blackburn’s Democrat opponent, saying that the Republican’s voting record “appalls and terrifies” her.

Speaking to Breitbart News this week, Blackburn warned the pop princess about the dangerous road she is going down with her politics.

“When you talk about country music, and I know the left is all out now and trying to change country music and make it woke,” Blackburn said. “When I’m talking to my friends who are musicians and entertainers, I say, ‘If we have a socialistic government—if we have Marxism—you are going to be the first ones who will be cut off because the state would have to approve your music.’”

Sen. Marsha Blackburn continues her running feud with Taylor Swift, warning her that if we have a “socialistic govt,” the state would have to “approve her music,” and won’t “allow women to dress, or sing, to be on stage, or entertain.” pic.twitter.com/HGXziiai8K

“Taylor Swift came after me in my 2018 campaign,” she continued. “But Taylor Swift would be the first victim of that because when you look at Marxist socialistic societies, they do not allow women to dress or sing or be on stage or to entertain or the type music she would have. They don’t allow protection of private intellectual property rights.”

In a 2020 Netflix documentary on Swift’s life, Miss Americana, she claimed that Blackburn is “Trump in a wig.”

Two years before that, Swift wrote about her beef with the senator on Instagram.

“As much as I have in the past and would like to continue voting for women in office, I cannot support Marsha Blackburn. Her voting record in Congress appalls and terrifies me,” Swift wrote. “She voted against equal pay for women. She voted against the Reauthorization of the Violence Against Women Act, which attempts to protect women from domestic violence, stalking, and date rape. She believes businesses have a right to refuse service to gay couples. She also believes they should not have the right to marry. These are not MY Tennessee values.”

Swift ran a voter drive and campaigned as hard as she could against Blackburn — but ultimately failed. 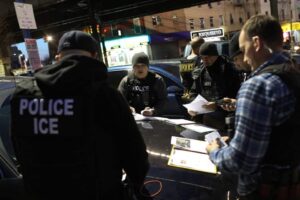