The bill aims to improve efficiency and modernize operations of USPS

On Tuesday, the Senate approved a $107 billion financial overhaul of the United States Postal Service (USPS) that intends to modernize and improve the agency’s efficiency.

The Postal Service Reform Act has already cleared the House and is now headed to President Biden for his signature.

The legislation provides the USPS the finances and flexibility to move forward on improvements needed for years. Lawmakers have often disparaged the agency as a prime example of government waste and incompetence. However, many have referred to its employees as everyday heroes throughout the pandemic.

The ongoing operations and role of the USPS during the COVID-19 pandemic compelled lawmakers to reach a consensus on restructuring its finances. A number of lawmakers have expressed concerns the USPS could not survive another financial shock.

With almost 50% of voters casting their ballots by mail during the 2020 election, along with surging e-commerce demand throughout the pandemic, it became clear the USPS needed an overhaul.

“The Post office usually delivers for us. Today we’re going to deliver for them,” Senate Majority Leader Chuck Schumer said on Tuesday.

The Postal Service has endured years of losses triggered by declining use of the service. That decline in use negatively affected revenue, forcing the agency to default on healthcare payments since 2011.

The bill also requires future retirees to enroll in Medicare, a move that would save taxpayers $1.5 billion over the next decade.

The bill also standardizes timely-delivery operations requirements for the USPS. The agency has struggled with on-time service since Postmaster General Louis DeJoy assumed the leadership of the USPS in June 2020.

Further, the bill allows the USPS to contract with local, state, and Indigenous governments to offer essential non-mail services, such as hunting and fishing licenses.

Postmaster General DeJoy had pushed postal legislation as the most significant component of his controversial 10-year “Delivering for America” plan for the USPS. DeJoy raised postage costs and lengthened delivery times to compensate for a projected $160 billion shortfall over the next decade. 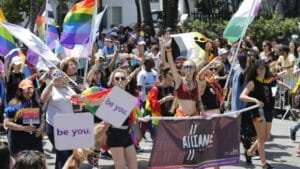