Sen. Rand Paul has announced that he is introducing an amendment to get rid of the director of the National Institute of Allergy and Infectious Diseases position, which Dr. Anthony Fauci currently holds.

In an op-ed for Fox News about the amendment, Sen. Paul wrote “we’ve learned a lot over the past two years, but one lesson in particular is that no one person should be deemed “dictator in chief.” No one person should have unilateral authority to make decisions for millions of Americans.”

Sen. Paul has frequently sparred with Dr. Fauci during senate hearings about the virus and America’s response to it.

“To ensure that ineffective, unscientific lockdowns and mandates are never foisted on the American people ever again, I will introduce an amendment to eliminate Dr. Anthony Fauci’s position as director of the National Institute of Allergy and Infectious Diseases and divide his power into three separate new institutes,” the Kentucky senator continued. “Each of these three institutes will be led by a director who is appointed by the president and confirmed by the Senate for a five-year term. This will create accountability and oversight into a taxpayer-funded position that has largely abused its power and has been responsible for many failures and misinformation during the COVID-19 pandemic.”

Fauci has held the position of director of the NIAID since 1984. ​​He is currently the highest-paid federal employee.

The senator continued on to write that, “no one person should have the sole authority to dictate science, especially when that one person wasn’t ever following the science. I’ve said that from the beginning, and I’ve been proven right over, and over, and over again. On masks, lockdowns, schools, natural immunity, all of it.”

Sen. Paul said that the nation has spent two years not “following the science,” because “‘the science’ is dictated by one man, an unelected bureaucrat with far too much power.” He noted that “a group of researchers at Johns Hopkins University released a report confirming that. The report is an extensive analysis looking at dozens and dozens of studies, which comes to the conclusion that lockdowns did not reduce mortality but were devastating to the economy.”

The op-ed concluded, “the biggest lesson we have learned over the last two years is that no one person should have this much unchecked power. And my amendment, which will get a vote this week, will finally force accountability and fire Dr. Fauci.” 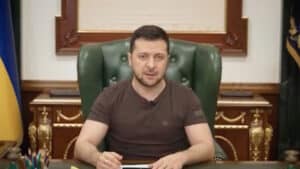 JUST IN: Ukrainian President Volodymyr Zelenskyy to Deliver Virtual Address to US Congress