Second Pregnancy Center Vandalized in Maryland, Vandal Threatens: 'If Abortions Aren't Safe, Neither Are You'

A second pregnancy center in Maryland has been vandalized by pro-abortion activists.

The vandals spray painted “if abortions aren’t safe, neither are you” across the front of the Alpha Pregnancy Center in Reisterstown on Saturday. It was strikingly similar to a message that was spray painted by arsonists at a Wisconsin anti-abortion organization’s office earlier this month.

Their destruction was signed “Jane’s Revenge,” the name of the pro-abortion group that has claimed responsibility for the recent arson and subsequently promised to “adopt increasingly extreme tactics.”

The center remained closed for the day on Monday.

Along with the threat, the pro-abortion vandal, or vandals, wrote “Not a clinic,” and “You’re anti-choice and not pro-life.”

“There was also evidence that whoever was responsible spray-painted over surveillance cameras, which could hinder the police investigation,” local station WBAL reports.

Crisis pregnancy centers, which offer alternatives to abortion, and anti-abortion non-profits, have been under attack this month following the leaked draft opinion from the Supreme Court that would overturn Roe v. Wade.

The Madison office of the Wisconsin Family Action was the target of vandalism and arson on Sunday, May 8. According to organization, the arsonists threw two Molotov cocktails into the office, after breaking windows, and then proceeded to light a fire.

A manifesto said to be from the group responsible was obtained by Bellingcat reporter Robert Evans.

The statement was sent to me through an anonymous intermediary I trust. It is hosted on a Tor site (link to follow). The statement is titled “first communique” and opens with the words, “This is not a declaration of war”.https://t.co/5ZhcDHiA7A pic.twitter.com/9Y0d03mXoq

In the manifesto, the group claimed that the arson was “only a warning” and that they have been “forced to adopt the minimum military requirement for a political struggle.”

“Wisconsin is the first flashpoint, but we are all over the US, and we will issue no further warnings,” the group claimed.

This was only a warning. We demand the disbanding of all anti-choice establishments, fake clinics, and violent anti-choice groups within the next thirty days. This is not a mere “difference of opinion” as some have framed it. We are literally fighting for our lives. We will not sit still while we are killed and forced into servitude. We have run thin on patience and mercy for those who seek to strip us of what little autonomy we have left. As you continue to bomb clinics and assassinate doctors with impunity, so too shall we adopt increasingly extreme tactics to maintain freedom over our own bodies.

We are forced to adopt the minimum military requirement for a political struggle. Again, this was only a warning. Next time the infrastructure of the enslavers will not survive. Medical imperialism will not face a passive enemy. Wisconsin is the first flashpoint, but we are all over the US, and we will issue no further warnings.

And we will not stop, we will not back down, nor will we hesitate to strike until the inalienable right to manage our own health is returned to us.

We are not one group, but many. We are in your city. We are in every city. Your repression only strengthens our accomplice-ship and resolve.

In a statement, Julaine Appling, president of Wisconsin Family Action, responded to the arson and took aim at Governor Evers — saying that he enabled the attack on their organization when he “basically looked the other way” during the 2020 Black Lives Matter riots in Kenosha and Madison.

“While this attack was directly provoked by the leaked draft opinion from the US Supreme Court in the Dobbs case earlier this week, this has far broader implication. Apparently, the tolerance that the left demands is truly a one-way street. Violence has become their answer to everything. This is what happens when leadership is missing or when leadership implies that violence is ok. In 2020, Governor Tony Evers basically looked the other way when violence erupted in Kenosha and Madison. That kind of non-response fosters what happened to us this morning, leaving Wisconsin citizens who disagree with his policies extremely vulnerable to similar violence,” Appling said.

Appling continued, “but this attack fails to frighten us, and instead steels the resolve of law-abiding, common-sense, every-day folks to stand up and push back. We know today it is Wisconsin Family Action getting Molotov cocktails tossed through broken windows and fires ignited, but tomorrow it could be anyone in our state or another state who is attacked because we disagree with a policy or action, give voice to the voiceless, or stand up for what’s right.”

“Americans see through the hypocrisy of the left. The violence needs to stop and stop now. It’s not the answer to any question or any problem. Just because the liberals don’t get their way, doesn’t give them license to threaten bodily harm or to burn and destroy,” Appling added. “Wisconsin has had enough of this kind of terror condoned by current state and national leaders. But we are still standing. We still support freedom. We love our republic and care for our neighbors. We will repair our offices, remain on the job, and build an even stronger grassroots effort. We will not back down. We will not stop doing what we are doing. Too much is at stake.”

CareNet of Frederick in Maryland was vandalized on May 3. The center provided Timcast with photos of the damage to their office, including graffiti urging people to go to “PP INSTEAD,” meaning Planned Parenthood. 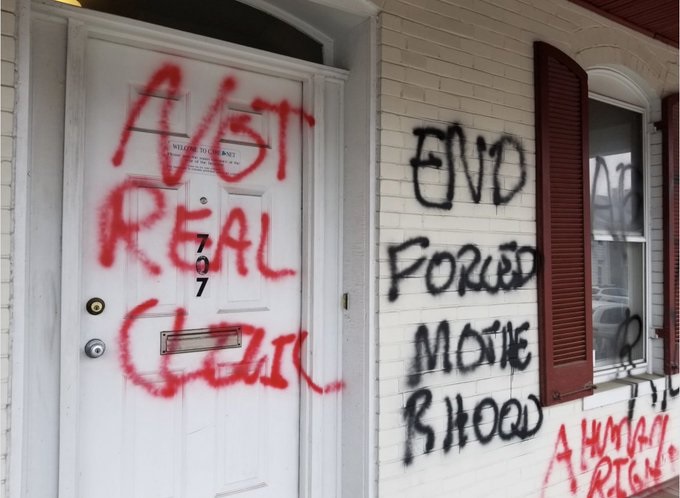 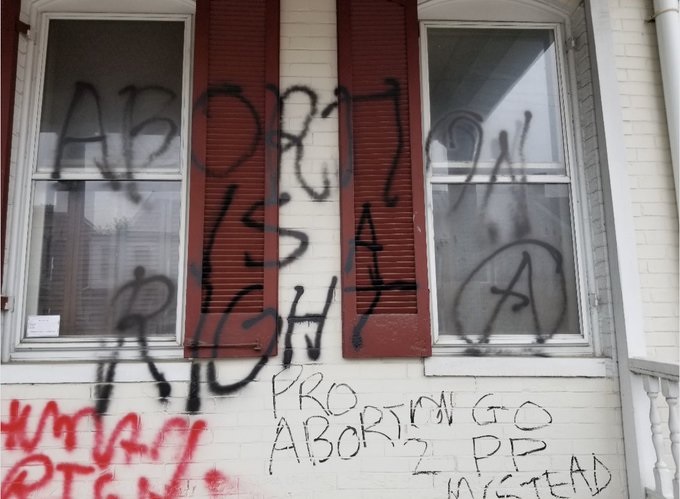 Two days later, the windows were smashed at First Image’s Southeast Portland Pregnancy Resource Center in Oregon. There has also been protests outside at least once center in Texas.

Activists are now promising a “summer of rage” in response to Roe v. Wade potentially being on the chopping block.

“For the women of this country, this will be a summer of rage,” said Rachel Carmona, president of Women’s March, according to a report from Reuters. “We will be ungovernable until this government starts working for us, until the attacks on our bodies let up, until the right to an abortion is codified into law.”

Anyone with information on the vandalism is asked to call Baltimore County Police at 410-307-2020. 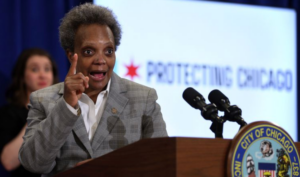