Sarah Huckabee Sanders will be the Republican gubernatorial candidate in Arkansas.

Sanders served as the White House Press Secretary under President Donald Trump from 2017 to 2019 and as a contributor to Fox News. She is the daughter of the 44th Governor of Arkansas Mike Huckabee, who served from 1996 to 2007 and ran for president twice.

Prior to the May 24 primary, polls indicated Sanders held a 57-point lead. Of the 800 participants, 73% planned to vote for Sanders while 16% supported Leslie Rutledge, the Attorney General who eventually switched to and won the race for lieutenant governor.

“We want to tackle making Arkansas the best place to live, work, and raise a family, and we’re going to get to work and roll our sleeves up very quickly to make that happen,” Sanders told local news station 40/29 on May 20.

Sanders has made education policy the focal point of her campaign.

“I think it is the best way to provide a pathway and an opportunity for every person in the state is to have a good and quality education, and I want to make sure that we give that to every kid growing up in this state, that it doesn’t matter where you start you’ll have every opportunity to decide where you’ll finish,” she said.

In the announcement of her Educators For Sarah coalition, Sanders vowed “to provide a quality education to every child in Arkansas by improving childhood literacy, empowering parents, closing the achievement gap, and preparing students for the workforce.”

Sanders had secured 83.2% of the votes by 9:30 P.M. on the evening of the election. Her remaining opponent, radio personality and podcaster Francis Washburn, claimed the remaining 16.8%.

Arkansas Democrats selected Chris Jones as their candidate for governor. Jones, who won just over 70% of the votes, is a nuclear engineer who was the former executive director of the Arkansas Regional Innovation Hub – a nonprofit that provides tools and training to students and entrepreneurs.

“He launched his campaign last year with an online video … that quickly went viral,” reports PBS. “In the video, Jones talked about his faith, love of science and his family’s history in the state.”

“I want to be a servant of the people,” Harringotn Jr. told KATV. “I want us to work together and build things together rather than engaging in this hyper-partisanship that is on the verge of destroying our democracy.”

Current Governor Asa Hutchinson was elected in 2015. Hutchinson cannot seek re-election because of Arkansas term limits. The governor has said he is considering running for president in 2024. 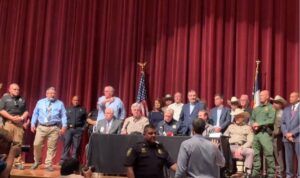