The San Diego Unified School District board voted unanimously to mandate vaccines for all staff and eligible students on Tuesday evening.

According to the board’s “Vaccination Roadmap,” staff and students will be required to take their first dose no later than November 29 and the second by December 20.

Board President Richard Barrera said the date for the second dose was chosen because it “allows for full immunity by the time students return from winter break in January.”

“It could not be more clear that this is the right move for us to take tonight,” Barrera said during the meeting, according to a report from Fox 5 San Diego. He added that communication will be “absolutely critical” as the district moves ahead with the policy.

The decision from the board will stagger inclusion of students 16 and older under the mandate, then students 12 and older, followed by ages 5 and older — pending vaccine approval by the U.S. Food and Drug Administration. Those who are too young to take the vaccine will be required to be tested regularly. 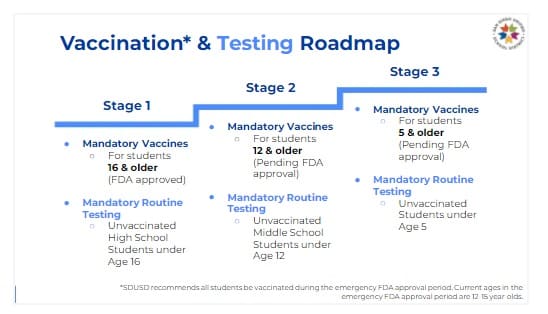 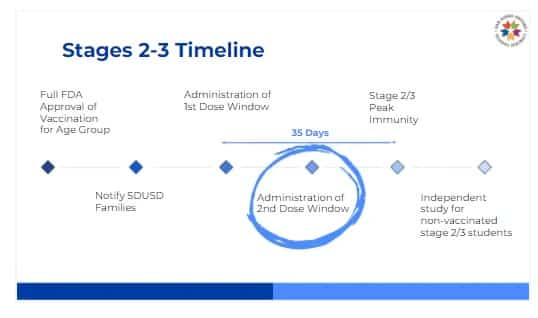 “The district’s recommendation is a staggered approach to have all eligible* students vaccinated against COVID-19, as a condition of attending in-person learning. The timeline for requiring the mandated vaccination will be aligned to the full FDA approval. Mandatory testing will be required for all unvaccinated students until full FDA approval of the vaccine for their age group,” the roadmap says.

Students with qualiﬁed exemptions or conditional admissions will not be required to take the jab. However, those who are eligible, but do not get the vaccine, will be required to do independent study and will not be allowed to participate in extracurricular activities.

According to the board’s Vaccination Roadmap, employees and contractors who do not comply with the mandate will face “disciplinary action, up to and including termination.”

“As of this week, 76% of San Diego Unified employees are fully vaccinated and nearly 81% of employees have received at least one dose, the district’s Vaccination Roadmap shows. About 57% of eligible students in the district are fully vaccinated with nearly 65% of students ages 12 and older receiving at least their first dose,” the Fox 5 report states.

There was approximately an hour of public comment about the vote during the meeting. One of the people who spoke out against the mandate was Brenda Taylor, who has taught elementary school in the district for 25 years. She said that she was speaking on behalf of “the unvaxxed staff afraid to speak out of fear of retaliation.”

“Your intentions may be good, but like the old saying goes, the road to hell is paved with good intentions,” Taylor said. “This flawed proposal that you’re hiding behind the word of science as if it’s absolute. We know that science is not perfect.”

The Vaccination Roadmap being implemented can be read in full here. 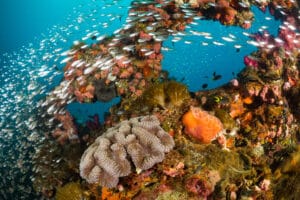