Russia Begins An Attack On Ukraine By Order of Putin

"President Putin has chosen a premeditated war that will bring a catastrophic loss of life and human suffering," said President Biden

Russian President Vladimir Putin has begun a full-scale invasion of Ukraine, according to multiple reports.

In a televised address on Thursday morning from Moscow, the Russian president announced his intention to begin a military campaign in the neighboring nation of Ukraine. Putin claimed the operation was intended to protect eastern Ukraine from what he calls a “regime.”

Dmytro Kuleba, the Minister of Foreign Affairs in Ukraine, said that a “full-scale invasion” by Russia had begun.

Putin has just launched a full-scale invasion of Ukraine. Peaceful Ukrainian cities are under strikes. This is a war of aggression. Ukraine will defend itself and will win. The world can and must stop Putin. The time to act is now.

Russia has amassed more than 190,000 troops near the Ukrainian border in the last few weeks. The nation has shown particular interest in the territory around the Donbas in the eastern portion of Ukraine.

Multiple outlets reported explosions in the Ukrainian capital of Kyiv and Kharkiv, a city in the northeast.

Explosions heard in the distance before sunrise in Kyiv, Ukraine.

Along with news reports of the attack, videos began appearing late Wednesday across social media showing what was said to be explosions and shelling of Ukrainian cities.

In a post on Twitter Wednesday night, Senator Marco Rubio said, “The #Russian invasion of #Ukraine is now underway.”

The military directive signed by Putin contends that “circumstances require us [Russia] to take decisive and immediate action” and stated that “the People’s Republic of Donbas turned to Russia with a request for help.”

Russia has been conducting joint military operations in Belarus, even as U.S. and NATO allies have issued firm warnings to Russia to abandon escalation of tensions in the region.

On Wednesday night, President Biden called the military action by Putin “an unprovoked and unjustified attack by Russian military forces.”

“President Putin has chosen a premeditated war that will bring a catastrophic loss of life and human suffering. Russia alone is responsible for the death and destruction this attack will bring, and the United States and its Allies and partners will respond in a united and decisive way. The world will hold Russia accountable,” Biden said.

Russia alone is responsible for the death and destruction this attack will bring, and the United States and its Allies and partners will respond in a united and decisive way.

The world will hold Russia accountable.

Ukrainian President Volodymyr Zelensky sought to appeal directly to the Russian people in a speech just hours before Putin’s announcement. Zelensky pleaded for peace and sought to combat insistence from Putin that Ukraine has provoked the Russian attack.

“Attacking us, you will see our faces, not our backs,” he said, according to a translation by the Financial Times. “I know this speech of mine will not be shown on Russian television,” he said. “But the citizens of Russia must know the truth. And the truth is this needs to stop before it’s too late.”

“They’re telling you that this flame will liberate the people of Ukraine, but the Ukrainian people are free,” he added.

Senator Mitt Romney said, “Putin’s Ukrainian invasion is the first time in 80 years that a great power has sought to conquer a sovereign nation. It is without provocation, without justification, and without honor,” in a statement Wednesday night. 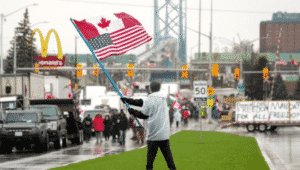