One of the laws restrict magazine capacity to 10 rounds

The governor of Rhode island signed three new bills into law that expand regulations on guns.

Activist groups, including Moms Demand Action and the Rhode Island Coalition Against Gun Violence, lobbied Governor Daniel J. McKee to support the measures in light of recent gun violence in other parts of the country.

“Today is about taking action and saving lives,” McKee said during the June 22 signing. “It’s about coming together and stepping up to protect the people of the state of Rhode Island.”

McKee said America “is in crisis.”

“This crisis has taken too many lives and torn apart too many families,” the governor said. “After the tragic shootings in New York and Texas, there was a call to action to address this crisis throughout the country.”

“No person, except for a federally licensed firearms dealer, shall manufacture, sell, offer to sell, transfer, purchase, possess, or have under his or her control a large capacity feeding device, except as otherwise authorized under this chapter,” the bill states.

Violations of the new law are punishable by up to five years in prison or possibly a $5,000 fine.

Rhode Island residents who surrender their large-capacity magazines to city or town police departments will not be subject to prosecution.

House Bill 7457 raises the minimum legal age to buy long guns and ammunition from 18 to 21. It is now illegal to “transfer, give, convey” a gun or to cause a gun “to be transferred, given or conveyed any firearm to any person” under the age of 18. Anyone who violates the law may be sentenced to 10 to 20 years in prison.

The age restriction does not apply to air rifles, air pistols, blank guns or BB guns.

Additionally, the bill states that “no person, firm or corporation shall sell ammunition to any person unless such person is twenty-one (21) years of age or older and holds a valid pistol/revolver safety certificate issued by the department of environmental management.”

There are exceptions granted for those engaged in some hunting activities. The ban does not apply to certain government employees such as deputy sheriffs, members of the 11 state police, prison or jail wardens or their deputies, and members of the city or town police forces.

During a debate on the policies in the state senate, some republicans argued the restriction infringed on the right of law-abiding gun owners.

“The issue here is that we are taking a path which I think will cause great harm to all of our law-abiding citizens,” said Senator Lou Raptakis.

“My image of this chamber is tarnished after how we got here tonight,” said Senator Gordon Rogers. 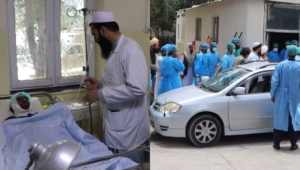