Kentucky Republican Rep. James Comer is calling on Congress to halt funding for the FBI over the Twitter Files revelations revealed by Elon Musk.

The Twitter Files revealed that former leadership at the platform was working with the FBI to suppress and censor users and news stories.

Rep. Comer, who is on the Oversight Committee, spoke to Maria Bartiromo on Fox Business about the newly revealed information and what he wants the GOP to do about it.

“You know, in the beginning, I thought that there were probably two or three rogue employees who were orchestrating this cover-up of the Hunter Biden laptop story,” the congressman said. “But now we know the FBI had a division of at least 80 agents. We also know that the FBI paid Twitter over $3 million for their time, all the time they took over the past couple of years in telling them who to suppress, who to ban. You know, it’s just things that the government has no role in. The FBI was never granted the authority to create any type of disinformation task force that policed the social media sites.”

Rep. Comer continued, “now, this we know with Twitter, we’ve heard similar stories from Zuckerberg. Who knows what went on at YouTube and Google? This is an agency that’s out of control. And the most frustrating thing for me right now, Maria, is the fact that in this omnibus bill, there’s increased funding for the FBI, plus a $1.75 billion headquarters facility for the FBI. We need to halt everything with the FBI, all funding, until they come forward and explain to Congress exactly what they were doing, why they were doing it, and who gave them the authority to do it.”

“That is just extraordinary that there is all of that money earmarked for the FBI despite all of this wrongdoing and evidence of collusion,” Bartiromo replied. “I don’t know why your colleagues in the Senate are going along with this omnibus bill weakening you right before you take the gavel.”

The congressman responded that “I mean, the one thing that we had the ability to do is. Is stop the spending. Stop the spending and, you know, we need an FBI. We really do. But this FBI is out of control. It’s doing things that Congress never granted the authority to do.”

“In no way, shape, or form should the government be in the business of censoring free speech, whether that be liberal speech or conservative speech,” Rep. Comer asserted. “That’s just something the government shouldn’t do. But to dedicate a whole task force of at least 80 employees do nothing but communicate with social media sites and telling them what stories to suppress, who to ban. It’s just wrong. It’s a it’s a gross misuse of taxpayer dollars. It’s a violation of the Constitution. And to think that as we speak, the Senate sitting here giving them more money for the next 12 months, tying our hands and our ability to get the FBI in front of the committee.”

Rep. Comer asserted that they could quickly get the FBI to appear before the Oversight Committee by cutting funding until they do so.

“You know, one way we could get the FBI in front of the committee really quickly is say, we’re not giving you a penny until you all come down here and explain to us what this task force was,” he explained. “Why you told Twitter to suppress the Hunter Biden laptop story when you knew darn well it was true. And the Senate is counter to everything that we’re trying to do in the House from an oversight standpoint right now, especially with respect to the FBI.” 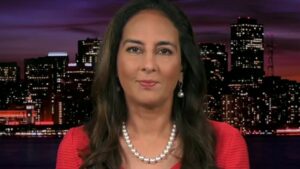