Republican lawmakers have introduced the Vaccine Passport and Voter ID Harmonization Act, which will require voter identification in states that have vaccine passport mandates.

The bill was introduced by in the Senate by Sen. Kevin Cramer and the House by Rep. Nancy Mace, with the goal of “requiring states and local jurisdictions that institute vaccine passports to require voter identification in federal elections.”

The bill, obtained by the Daily Caller, says that it would go into effect for any election held on or after January 1, 2022.

“It makes no sense for Democrats to adamantly oppose commonsense Voter ID policies which protect the integrity of our elections,” Cramer said in a statement.

The senator pointed out that if politicians want to make people provide medical records to go out to eat, they should be fine with voters having to prove who they are at the polls.

“If they’re comfortable making people show their private medical records to simply go to a restaurant, they should be fine having people prove they are who they say they are before they vote,” he continued. “Our legislation shines a light on their hypocrisy.”

There are also counties seeking to impose passports on people.

Officials in Montgomery County, Maryland, which is right outside Washington, DC, are planning to discuss the idea of regional vaccine passports with leaders of neighboring jurisdictions this week.

“I support the development of a regional or statewide vaccination passport,” County Executive Marc Elrich said during a weekly media briefing Wednesday, according to a report from WTOP. “It wouldn’t do us any good just to do it in one county, but if the regional leaders are interested — and some of them might be — doing this together as a collective action would help make all of our residents safer.” 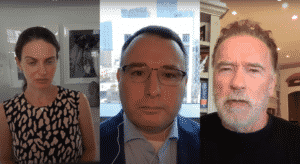