'In a serious country, Bolton would be in Prison,' Tayler Hansen told Timcast

An independent reporter was taken out of an event in handcuffs after asking John Bolton about his involvement in a number of international controversies.

Tayler Hansen questioned Bolton as he addressed a crowd at an event hosted by the Institute for Policy Innovation in Irving, Texas.

“Mr. Bolton, how do you expect us to trust you when you lied about weapons of mass destruction in Iraq?” Hansen says in a video posted on Twitter. “You essentially genocided the Iraqi people.”

Other attendees of the event can be observed turning to look at Hansen as he continues.

“And you covered up war crimes in Afghanistan, sir! While did you celebrate the arrest of Julian Assange?” he continues as he is escorted from the room.

“Another example of the First Amendment,” Bolton tells the crowd from the podium after Hansen was removed.

The end of the video shows Hansen being led out of the building in handcuffs.

“John Bolton is a war criminal and should be in Prison, I decided to ask him these questions because he is yet to be held accountable for his terrible crimes,” Hansen told Timcast in a written statement. “In a serious country Bolton would be in Prison and Julian Assange would be a free man— Journalism is not a crime.”

At an event about current National Security threats—

I asked @AmbJohnBolton why he lied about WMD’s in Iraq, covered up war crimes in Afghanistan, and celebrated when Julian Assange was arrested.

I was immediately detained and removed from the event. pic.twitter.com/zctfbORghW

Bolton was a national security advisor to President Donald Trump. He has also served in a number of Republican administrations, including under Presidents Ronald Reagan, George H.W. Bush and George W. Bush. As part of IPI’s Sumner Distinguished Lecture Series, Bolton was giving a speech on national security issues currently facing the country.

“With Russia threatening the use of nuclear weapons in Ukraine, China menacing Taiwan, protests in Iran and tensions with the Saudis, national security and foreign policy issues are once again topping the news and concerning American policymakers,” IPI said in a listing for the Nov. 10 event on its website.

During an October appearance on “Uncensored,” Bolton told host Piers Morgan that WikiLeaks con-founder Assange was not a legitimate journalist and should be given a lengthy prison sentence if extradited to the U.S.

“He’s no more a journalist than the chair I’m sitting on. The information that he divulged did, in fact, put many people in jeopardy [and] it undercut the ability of the United States to have confidential diplomatic communications,” said Bolton.

“He’s been complaining about his treatment over the past period of time – he’s the one who sought asylum in the Ecuadorian embassy,” he added. “I hope he gets at least 176 years in jail for what he did.”

Julian Assange’s wife, Stella, responded by calling Bolton the “ideological nemesis” of her husband and said the ambassador has sought to “undermine the international legal system.” She called Bolton one of the “chief cheerleaders of the Iraq war” who had a “conflict of interest” because Assange published classified information about the war. She also said her husband cannot get a fair trial in the U.S. because he is being prosecuted under the Espionage Act and, therefore, cannot mount a public interest defense. 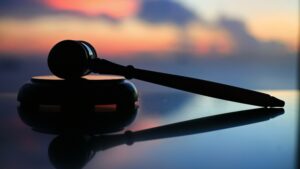