Billionaire progressive George Soros will reportedly spend upwards of $125 million to help Democratic politicians in the upcoming 2022 midterm elections, setting the stage for a high-stakes showdown for the future of Congress.

According to Soros, the money will be used to help “causes and candidates, regardless of political party” who are working towards “strengthening the infrastructure of American democracy: voting rights and civic participation, civil rights and liberties, and the rule of law.”

“Billionaire philanthropist and Democratic mega donor George Soros is pumping $125 million into a super PAC to support Democrats running in November’s midterm elections and beyond,” reports Fox News. “The 91-year-old Soros, who made his fortune in hedge funds, is infusing the money into the Democracy PAC, which he set up in 2019 to serve as his main political action committee to support Democratic causes, candidates and committees. Soros channeled roughly $80 million into the group during the 2020 cycle.”

The billionaire’s son, Alexander Soros, will serve as the head of the Political Action Committee. 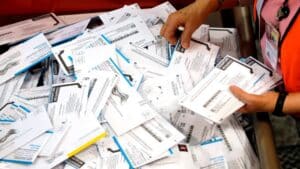