Rep. Adam Kinzinger Says He Would 'Love' to Run Against Trump in 2024 Primary

Rep. Adam Kinzinger has said in an interview that he would “love” to run against former President Donald Trump in the 2024 Republican primary.

Kinzinger has been an outspoken critic of Trump and currently sits on the House committee investigating the protest at the Capitol on January 6.

A reporter from the HuffPost asked Kinzinger if he wants to run against Trump.

“I would love it. I really would,” Kinzinger said, “his eyes instantly widening,” according to the reporter.

“Even if he crushed me, like in a primary, to be able to stand up and call out the garbage is just a necessary thing, regardless of who it is. … I think it’d be fun,” Kinzinger added.

Though he thinks it would be “fun,” Kinzinger claims that he is not currently planning a run — but will not rule it out.

“I’ll make a decision when we get there, if there’s a need and a desire. It’s truly not anything I’m planning right now, but I’m not going to rule it out.”

The Illinois representative said that while he wants to remain in politics, he no longer wants to be in Congress.

While Kinzinger may have big plans for a higher office, even the HuffPost noted, “Democrats might see Kinzinger as brave, but Schilling said there’s no demand in the GOP for what Kinzinger is selling.”

“He’s on the wrong side,” Terry Schilling, president of the conservative American Principles Project, told HuffPost. “It’s a movement that has been destroyed, a party that has been destroyed. The Republican Party that Adam Kinzinger grew up in doesn’t exist anymore, and so he has no constituency. He’s basically representing the Lincoln Project wing of the party, which doesn’t exist. They’re just Democrats, right?”

Kinzinger himself admitted during the interview that he does not really fit in the GOP.

“I think mentally I feel more like an independent than a Republican. If there were more Democrats like [House Majority Leader] Steny Hoyer, I could probably identify in that area, some kind of a moderate Democrat. In essence, I guess I’m still comfortable holding the Republican label for now. Because as much as people love it or hate it, the Republican Party is going to be around for a while, and it deserves to have a battle for who it is,” he said.

Trump has heavily implied that he plans to run in 2024, but had not officially announced his candidacy as of mid-April, 2022. 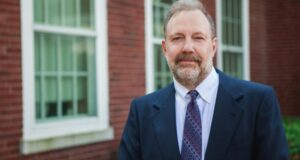