Frustrated JFK researchers say there is little to gain from Wednesday’s release of formerly classified documents from the investigation of the 1963 assassination of President John F. Kennedy.

Most of the 1,491 documents released by the National Archives appear to duplicate previously released documents, with a few redacted words now revealed. Some records reflect no change whatsoever.

Wednesday’s release still leaves more than 10,000 documents either redacted or withheld entirely. Those additional documents won’t be released until December 2022 under an order issued by President Joe Biden in October.

The delay of records has prolonged the debate between the federal government and avid JFK researchers, who argue that CIA, FBI, and other national security agencies continue to disregard a release mandate issued in recent years.

“It’s always ‘the next time,'” said Larry Sabato, a leading scholar of the assassination. Sabato called the revelations in Wednesday’s release “minimal and worthless.”

Still, other voices in the JFK research community spoke up Wednesday, expressing criticism over the release.

“Why should we trust that some or most of the additional, unreleased material is not simply BS or overclassification?” Stuart Wexler, an assassination researcher and best-selling author, told Politico this week.. “And more importantly, why should we trust that they are being held for legitimate reasons and not because they are embarrassing in some way?”

The documents released this week include memos detailing an anonymous phone call to the U.S. embassy in Canberra, Australia, a year before the shooting. According to the documents, the caller said the Soviet Government was plotting to kill Kennedy and details of Oswald’s meeting with a KGB agent at the Soviet Embassy in Mexico City two months prior to the shooting.

The documents further revealed that a Naval Attaché in Canberra, Australia cabled the CIA in 1962 to report a crank call warning that “Iron Curtain countries” were plotting to hire a Polish chauffeur for $100,000 to kill Kennedy.

The documents refer to meetings between communist activists and Lee Harvey Oswald, Kennedy’s accused assassin, and how he tried to renounce his U.S. citizenship to become Russian four years before the assassination.

The meeting had been revealed in previous documents, but new details emerged.

New details reveal that Oswald was at the Soviet Embassy in September 1963 and spoke with Consul Valeriy Vladimirovich.

The documents state, “Oswald called the Soviet Embassy on October 1, identifying himself by name and speaking broken Russian, stating the above and asking the guard who answered the phone whether there was anything concerning the telegram to Washington, a memo, written by CIA officer Tennent H. Bagley on November 23, 1963, the day after the assassination.”

On November 24, 1963, two days after Kennedy’s assassination, the Naval Attaché in Canberra, Australia cabled the CIA that someone claiming to be a Polish chauffeur at the Soviet Union embassy had telephoned to report that the Soviet government had “probably” financed the assassination. The communication echoed the recorded call a year earlier about the chauffeur being hired for $100,000 for JFK’s assassination.

Aside from this limited view of Oswald’s interaction with the Soviets and a few details regarding the chauffer, the newly released documents simply generated more frustration than satisfaction.

Amidst the disappointment by critics and researchers, there is a lingering frustration from the Kennedy family.

Earlier this year, Robert F. Kennedy Jr., JFK’s nephew, expressed his disdain that many documents would remain classified or redacted.

“It’s an outrage,” RFK Jr. told Politico in October. “It’s an outrage against American democracy. We’re not supposed to have secret governments within the government. How the hell is it 58 years later, and what in the world could justify not releasing these documents?”

“I think for the good of the country, everything has to be put out there so there’s greater understanding of our history,” he said. 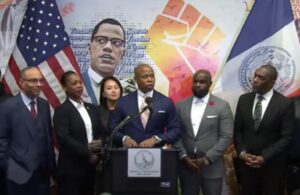