Senator Rand Paul (R-KY) has been suspended from YouTube over a video with a journalist in which they discussed “a variety of topics, including the science behind masks.”

“Despite the fact that Dr. Paul’s comments were based on scientific evidence, YouTube, acting in lockstep with the government, claimed it contradicts the government’s official position and censored the video,” Senator Paul’s office said. “In response to this ridiculous act of censorship, Dr. Paul released a video message explaining the science and facts behind his comments and urging those who want uncensored news to view his content on Rumble.”

In the response video, which has now been deleted, Paul stated, “YouTube said the video violated their policy because of my comments on masks, and that they don’t allow videos that contradict government’s guidance on COVID.”

YouTube’s censorship of Paul’s discussion over the efficacy of masks comes after Biden COVID-19 Advisory Board member Michael Osterholm said during a CNN interview last week, “We know today that many of the face cloth coverings that people wear are not very effective in reducing any of the virus movement in or out.” 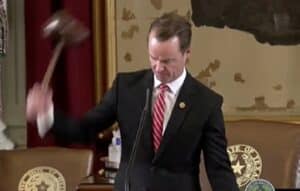