A whopping 340 openly LGBTQ candidates won their midterm elections on Tuesday, according to a report from the LGBTQ Victory Fund.

The organization, which promotes, tracks, and supports LGBTQ politicians, referred to the massive wins as a “Rainbow Wave.”

“At least 340 out LGBTQ candidates running in the 2022 midterms have won their elections as of 2:00am, the most in U.S. history and surpassing the previous record of 336 set in 2020. More victories are expected in the coming days. At least 1,065 out LGBTQ people ran for office this year – a historic number,” the organization said in a press release.

“Bigots tried their best to undermine our political power – but their hate backfired and motivated more LGBTQ people to run and win than ever before. Tonight’s Rainbow Wave is a clear rebuke to the increased homophobia and transphobia sweeping our communities – and proves voters want to elect qualified LGBTQ leaders. With so much at stake this election, from the future of marriage equality to abortion, LGBTQ candidates’ grit and exceptional grassroots support is paying off.”

NPR reports that Roesener is a “26-year-old Democrat, who identifies as bisexual and lives in Concord with his wife and cat, says in his biography that he’s never been afraid to stand up for what he believes in.”

“I believe that it is imperative that all individuals have the ability to thrive in New Hampshire,” Roesener said in a statement, according to the NPR report. “We need a leadership that is invested in defending the freedom all people by taking away barriers to shelter, education, healthcare, voting, and other basic necessities for a quality life.”

Parker called Roesener’s election a “resounding win for New Hampshire and for trans people across the country.” She said that the candidate shattered a “lavender ceiling.”

“Tonight is a resounding win for New Hampshire and for trans people across the country, with James shattering a lavender ceiling and proving that America is ready for trans men leaders in our state legislatures. From safeguarding reproductive rights to increasing investment in New Hampshire’s education and health care systems, James is well prepared to enact legislation that will deliver lasting results for his community. At a time of intensifying transphobia at all levels of government and society, he showed incredible courage throughout his historic campaign. Trans people – and trans men in particular – remain severely underrepresented in government at every level, but we are confident his win will inspire many more trans people to run for office.” 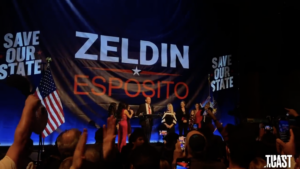