The Queen and Trudeau met at Windsor Castle on March 7. The British monarch has resided at the castle since the outbreak of the pandemic in 2020.

She tested positive for COVID-19 on Feb. 20 at the age of 95. The palace announced that she was fully vaccinated and opted not to give day-to-day updates on her health to maintain her privacy, per AP News.

“She will continue to receive medical attention and will follow all the appropriate guidelines,” a statement from Buckingham Palace said.

While in isolation, the monarch held several virtual meetings including a meeting with Vishnu Dhanpaul, the High Commissioner of Trinidad and Tobago.

Trudeau first met with the queen as a child when his father, Pierre Elliott Trudeau, was the Prime Minister of Canada.

The younger Trudeau was in the United Kingdom to meet with British Prime Minister Boris Johnson and Dutch Prime Minister Mark Rutte to discuss the ongoing war in Ukraine.

The meeting took place at RAF Northolt and both Johnson and Trudeau seemed “to be uneasy in their approach to each other, with both appearing to shuffle with their jackets as they greet,” reported The Express.

Canada has sent 15 million rounds of ammunition as well as automatic weapons, carbine and handguns to Ukraine over the last two weeks. The North American nation has promised to spend $25 million on helmets, body armor, gas masks, and other gear as well as 4,500 M72 rocket launchers and up to 7,500 hand grenades.

Trudeau last met with the Queen in June of 2021 during the G7 Summit during a reception for The Eden Project in Cornwall.

During their recent audience, both leaders were photographed smiling and shaking hands in front of a blue and yellow floral arrangement. People Magazine noted the arrangement was in the Ukrainian national colors. Neither wore masks during the meeting.

🇨🇦 This afternoon The Queen received the Prime Minister of Canada, @JustinTrudeau, for an Audience at Windsor Castle.

Audiences last approximately 20 minutes and are entirely private. There are no recordings or transcripts of the meeting.

Queen Elizabeth is also the Queen of Canada and has visited the country on more than 20 occasions.

Trudeau will visit three other countries during his European trip to discuss the Russian-Ukrainian conflict. 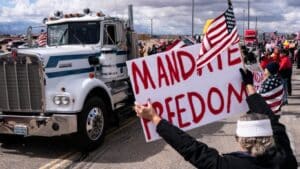 The People's Convoy Set to Circle DC Beltway on Monday