Psaki: Rising Prices Are 'A Good Thing' Because It Means 'Increasing Demand'

“A year ago, people were in their homes, 10 percent of people were unemployed,” she said. “Gas prices were low because nobody was driving. People weren’t buying goods because they didn’t have jobs. Now, more people have jobs, more people are buying goods, that’s increasing the demand. That’s a good thing.”

The recent decline in the unemployment rate has also been driven by workers leaving the labor force, not a result of jobs being added back, according to the Department of Labor’s September 2021 jobs report.

The Wall Street Journal explained, “The economy created 194,000 jobs in September, the smallest gain since December 2020 and down from 366,000 jobs added in August. Many workers gave up a job search and exited the labor force last month. The smaller pool of labor meant that despite the slowdown in hiring, the unemployment rate fell to 4.8% last month from 5.2% in August.”

Gas prices are also at their highest since 2014, when Biden was vice president, and are currently about 50% higher than they were when Biden entered office.

Psaki said that the Biden administration’s supply chain crisis was also a cause of the rising prices.

“We also know that the supply is low because we’re coming out of the pandemic and because a bunch of manufacturing sectors across the world have shut down, because ports haven’t been functioning as they should be,” Psaki said. “These are all things we’re working through.”

The current inflation crisis began in April 2021 when inflation rates surged to their highest level since the Great Recession. 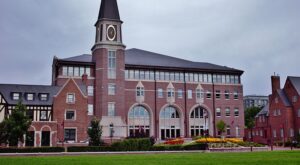