Department of Public Safety officers shot tear gas out the windows of the Arizona Capitol Building on Friday evening after it was surrounded by thousands of pro-abortion protesters.

The protesters were banging on the windows and attempting to break them to get inside, according to DPS — which prompted the Senate to go into recess.

WATCH: Chaotic scenes during pro-choice rally at the Arizona Capitol, forcing the Senate to go into recess pic.twitter.com/9xk257UsJF

“Senate immediately bails out because of ‘security situation.’ Area outside Senate filled with people protesting Roe decision. They appear to have entered building,” 12 News reporter Brahm Resnik tweeted with a video from the Senate chamber.

AND THEN… Senate immediately bails out because of ‘security situation.’ Area outside Senate filled with people protesting Roe decision. They appear to have entered building. pic.twitter.com/scZfijFz4G

State Senate assembles in a hearing room to continue work on major water legislation because the fumes from tear gas outside is too thick in their chambers. Police fired tear gas after people at an abortion rally pounded on doors and windows pic.twitter.com/wJHIcpqidz

State Senator Michelle Ugenti-Rita posted videos from inside the building, though it did not appear that any protesters had actually made it inside.

According to a report from AZ Family, “the rally started at 7 p.m. on Friday. The protesters then marched around the Capitol grounds. Many of them held up signs saying ‘Abort SCOTUS,’ and ‘Bans off our bodies.’ They also chanted ‘My body, my choice.’ The protest was peaceful for most of the night, even with a few counterprotesters who arrived and displayed crucifixes.”

The scene changed around 8:45 p.m. local time, when the protesters went up to the building and tried to gain entry, according to DPS.

Right now Arizona police are in riot gear clearing out the pro-choice protesters as they Fire teargas right into the crowd straight from the Capitol windows in Phoenix Arizona pic.twitter.com/DuwFA08zKU

NOW: Flash bangs and tear gas used outside the Arizona State Capitol as protestors were gathered. An unlawful assembly has been declared. @12News pic.twitter.com/XJAnGal7cU

Here’s the moment DPS fired off tear gas to disperse the left-wing rioters trying to break inside the Arizona state capitol. The tear gas quickly cleared the area. pic.twitter.com/KGDDZoEyov

The officers ended up deploying tear gas, which cleared out the crowd.

Local 12 News reporter Bianca Buono tweeted a statement from DPS which explained, “Troopers deployed gas outside the Senate building after protesters attempted to break the glass. The crowd then moved to the Wesley Bolin Plaza where some monuments were vandalized. Gas was deployed again to disburse the crowd.” 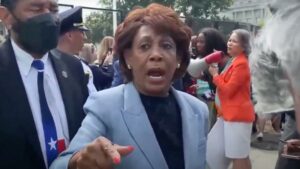