On Tuesday, while visiting an ethanol plant in Iowa, President Biden is set to announce efforts to ease gas prices while focusing on his continued agenda to curb the use of fossil fuels.

In a Fact Sheet released by the White House on Tuesday, the administration stated that the Environmental Protection Agency (EPA) would be taking steps to temporarily allow the use of the E15, an Ethanol Gasoline mixture. The agency is set to issue a voucher allowing the sale of the fuel during the summer months.

The E15 blend can cost 10 cents per gallon less on average. The hope is to ease the national average gas price, which currently sits at $4.11 per gallon.

In the fact sheet, the White House said the choice of allowing the sale of E15 was the “latest step in expanding Americans’ access to affordable fuel supply and bringing relief to Americans suffering from Putin’s Price Hike at the pump.”

The White House said that Tuesday’s announcement is another step to “reinforce the Biden-Harris Administration’s goal of achieving real energy independence and commitment to a long-term strategy to spur smart development and adoption of sustainable, homegrown fuels.”

The administration announced they would be providing up to $700 million in funding through a new Biofuel Producer Program, focused on encouraging more development of biofuels in the U.S. They announced a $5.6 million grant system called the Higher Blends Infrastructure Incentive Program to promote innovation in biofuels.

The administration also announced “$100 million in new funding for grants” geared toward “installation, retrofitting or otherwise upgrading of infrastructure” required to allow more access to fuel blends such as E15.

Under former President Trump, the EPA granted E15 a waiver for year-round use in 2019. However, the U.S. Court of Appeals for the District of Columbia Circuit struck down the rule last year.

Biden’s trip on Tuesday is meant to highlight Iowa as the nation’s top producer of renewable fuel. 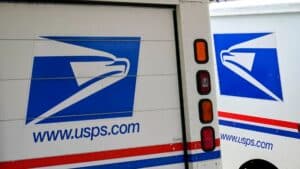 US Postal Service Suspends Service in Santa Monica Amid Violence