According to the White House, 'Inflation is too high and is putting a strain on working families'

On Tuesday, President Biden is set to address the nation on inflation and its impact on most Americans’ lives, including gas prices, food, and housing costs.

According to an outline released by the White House, Biden is set to tackle multiple causes of inflation and propose a number of solutions.

According to the outline of Biden’s plan, he will address the inflation by “lowering costs that families face and lowering the federal deficit by asking the large corporations and the wealthiest Americans to pay their fair share.”

The statement points to “a new minimum tax on the middle class,” which the White House says is led by the Republican party. According to the details, the Republicans plan to back a new tax that would result in an “average of almost $1,500 less in families’ pockets each year.”

The outline notes that the new tax effort is led by Senator Rick Scott from Florida. If a proposed tax hike were to occur, it would come as a reversal of Scott’s statements Sunday on Fox News’ Faulkner Focus this past week, where he called himself the “biggest tax-cutter in the Senate.”

The statement highlights the Federal Reserve as a pivotal institution that can impact inflation. The White House, in the outline, urges lawmakers to confirm the nominees for the Federal Reserve leadership position that the President has appointed. Those nominations include Michael Barr, who served as Assistant Secretary of the U.S. Treasury under former President Obama.

In Tuesday’s address to the nation, the President will outline multiple steps he plans to take to help ease the impact of inflation on most Americans.

The President will also continue his call for electric vehicles as a standard, with a focus that “one of every two cars sold in 2030 burns no fossil fuels.”

The President will highlight his plan to lower the cost of healthcare for most Americans with his push to fix the “Family Glitch” that exists in the Affordable Care Act and reduce the cost of prescription drugs. The move could open up affordable care plans for more Americans.

The President will also discuss his plan to increase domestic food production to help reduce rising food costs. As part of that focus, he plans to provide additional funding to help bolster domestic meat processing and halt the practice of price-fixing that impacts most American families’ budgets.

The President will focus attention on the issues of supply chain struggles and national infrastructure. He will also discuss “implementing the historic Bipartisan Infrastructure Law, which will mean goods move to market more quickly and cheaper.”

He plans to address the cost of child care for working Americans with hopes of lowering monthly costs that impact most taxpayers.

Finally, he plans to address rising housing costs by issuing a tax credit and federal financing that he hopes will result in the construction of one million affordable homes in the United States.

Under the Biden Administration, inflation has hit historic highs. The gross national output has seen a drop. Without intervention, the nation is set up for a period of recession 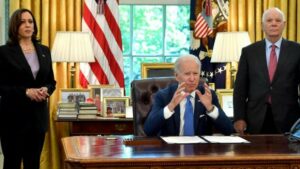