On Tuesday, President Biden announced his support for getting rid of the filibuster in the Senate to pass legislation that would overhaul the nation’s voting laws.

Currently, there is little or no support for the voting law change from Senate Republicans, and bringing the reform may only be possible if the filibuster rule is removed from the Senate.

The bills will additionally introduce a new criminal offense, or felony, for anyone blocking the rights of another to vote in an open election.

To pass the bills, in the face of Republican opposition, the Senate must change a protocol that has been in place for more than 200 years.

In the Senate, a filibuster, or a minimum of 60 senators, is required to move forward in passing any bill. The filibuster has been in practice since 1806, under Vice President Aaron Burr.

The President challenged the filibuster and called for changes from the Senate, along with Vice President Kamala Harris.

“Sadly, the United States Senate, designed to be the world’s greatest deliberative body, has been rendered a shell of its former self,” the President said. “It gives me no satisfaction in saying that, as an institutionalist, as a man who was honored to serve in the Senate. But as an institutionalist, I believe the threat to democracy is so grave that we must find a way to pass these voting rights bills, debate them, vote, let the majority prevail.”

He continued, referring to the filibuster, “And if that bare minimum is blocked, we have no option but to change the Senate rules, including getting rid of the filibuster for this.”

The President called for strong support for the legacy of the late John Lewis and Martin Luther King, Jr.

“I’ve been having these quiet conversations with members of Congress for the last two months. I’m tired of being quiet!” Biden exclaimed during his speech.

The President claims that Republicans have tried to block the voting rights reform because “too many people voting in a democracy is a problem.” 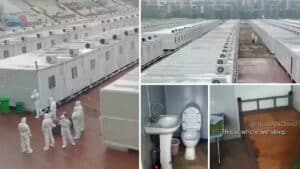