President Joe Biden announced the launch of a new website dedicated to countering hate-fueled violence and domestic terrorism during the United We Stand Summit at the White House on Thursday.

“We have to stand united against hate-fueled violence — because it’s real, and you know it better than anyone — to affirm that an attack on one group of us is literally an attack on all of us,” the President said before detailing the Charlottesville car attack of 2017 as the reason he ran for office. Biden then recalled former President Donald Trump’s remarks about the car attack.

He then detailed plans of the initiative as trainings and partnerships focused on combating hate-fueled violence. The President encouraging Congress to pass his proposed budget, remove special immunity for social media companies and increase minimum wage to $15 before announcing the new website.

“A new bipartisan initiative, Dignity.us, will take this nation and the national conversation we launched today on the road across all 50 states and the District of Columbia — territories, tribal lands — to listen and learn from the people doing this work and find ways to scale up the best ideas,” he said.

At the United We Stand Summit, President Biden announced the launch of https://t.co/239ftznKyr, an initiative to counter hate-fueled violence and domestic terrorism. pic.twitter.com/6ML9vMAzY3

Former President Trump originally responded to the aforementioned Charlottesville attack on Aug. 14 2017, saying, “We condemn in the strongest possible terms this egregious display of hatred, bigotry and violence – it has no place in America. … Racism is evil, and those who cause violence in its name are criminals and thugs, including the KKK, neo-Nazis, white supremacists and other hate groups that are repugnant to everything we hold dear as Americans,” according to the full text released by Politico.

The next day, Trump held a press conference where he was further questioned about the attack. He claimed the media’s apparent coverage was one-sided, saying, “You had some very bad people in that group, but you also had people that were very fine people on both sides.”

He added: “And I’m not talking about the neo-nazis or the white nationalists because they should be condemned totally.”

The new website, which is currently live, claims “by early 2023, we will turn our findings into a country-wide response that greatly expands the scale of effective community-based innovations – and helps to mobilize and sustain a united front that transcends our differences.”

The bipartisan co-chairs running the project include former Domestic Policy Council directors Melody Barnes, Cecilia Muñoz, John Bridgeland, and Joe Grogan — all of whom served under the past three presidential administrations. 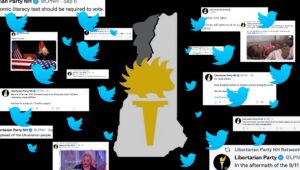