The Latin Mass is popular among traditional Catholics

Pope Francis moved to restrict the practice of Latin Masses with a new decree issued over the weekend.

Latin Masses are favored by traditional Catholics and have become a point of contention that divides the religion. Pope Benedict XVI gave permission for priests and Catholic groups to perform Latin Mass, which relies on more traditional theology. His authorization included permission to perform the ancient prayers and liturgies for baptisms, confirmations and ordinations.

Pope Francis “was chosen against a background of turbulence and strife unprecedented in modern times” and had to lead “a church whose faithful have been shocked by a proliferation of clerical sex abuse scandals throughout the rich world,” per The Guardian.

He is known for his more progressive stances on topics like climate change, immigration and same-sex relationships.

The new decree comes after local churches asked for clarification regarding a July missive from the pope that banned the practice.

Following Francis’ announcement, churches must get the approval of a local bishop and the Vatican to perform a Latin Mass.

The pope said the Latin Mass had “been exploited by Catholics opposed to the Second Vatican Council, the 1960s meetings that modernized the church and its liturgy,” per VOA News.

“His July law required individual bishops to approve celebrations of the old Mass, also called the Tridentine Mass, and required newly ordained priests to receive explicit permission to celebrate it from their bishops, in consultation with the Vatican,” the outlet added. “Saturday’s decree makes clear the Vatican must explicitly authorize new priests to celebrate the rite.”

“The guidelines ban the use of the old rite for sacraments and ordinations. Priests are also not authorized to perform in both Latin and modern masses,” reports UPI. “But the guidelines provide an exception for parishes when there isn’t the ‘possibility of locating a church, oratory or chapel for a group of faithful that celebrate’ using modern Mass.”

Francis’ decree says that the time a Latin Mass is scheduled should not be published in normal parish schedules.

The announcement has been regarded by many as an attack on more conservative Catholics.

Joseph Shaw, the Chairman of the Latin Mass Society, said on Twitter that the decree “will have serious negative consequences for souls.”

This is another document which will have serious negative consequences for souls and will drive Catholics wishing only to attend Mass in communion with their bishop to the SSPX. Some of it however is difficult to understand and a full statement will take a little time to prepare. https://t.co/ms5xJO76ZK

Many traditionalists prefer “the Latin rite’s sense of mystery and awe,” according to Reuters.

“If Pope Francis believed that the old Mass and the new Mass expressed the same faith, and that it formed people for the same faith, then the old rite would not be seen as a threat that must be hidden and stamped out,” wrote Michael Brendan Dougherty for National Review. “The pope sees the faith once delivered to the saints as a problem to be overcome.”

The document was approved for publication by Francis and signed by Archbishop Arthur Roche, the head of the Vatican’s liturgy office. 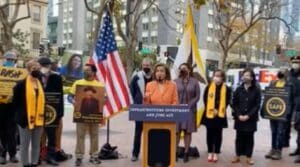