Poll: Woke Politicians To Blame For Crime Increase, According To Over 60 Percent Of Americans

Sixty-Four Percent of Americans blame woke politicians for an increase in crime, according to a Friday poll.

The Harvard-Harris poll showed 36% of respondents blaming the crime increase on “other factors.”

Poll results show Republicans having an advantage over Democrats with financial and safety related issues including inflation, crime, and immigration, while Democrats are largely seen as focusing on the January 6 riot, abortion rights, and climate change. Eighty-four percent of Americans believe the United States is currently in a recession or will be in one by 2023 along with 58% responding with a lack of confidence in President Biden’s ability to stave off inflation.

From the recent Harvard Harris poll: 64% of the country, including a majority of Democrats & Independents, blames "woke politicians" for the rise in crimehttps://t.co/ag3NTBsZoc pic.twitter.com/dFpMyBk6vD

“Republicans are inching back towards a wave election after a summer when abortion seemed to turn the tides,” said Co-Director of the Harvard-CAPS Harris Poll and Stagwell Chairman and CEO Mark Penn. “People are more motivated to vote when they are upset, and the Republicans are capturing voter dissatisfaction on inflation, crime, and immigration. Americans are suffering incredible economic anxiety on top of normal buyer’s remorse for the president and his party in a midterm.”

Republicans are reportedly winning congressional ballots 53-47 among likely voters, according to the poll.

Forty-eight percent of respondents further said stopping the teaching of woke ideologies in schools was a “very important” issue regarding their vote in the midterm elections. Twenty-nine percent responded “somewhat important” along with 23% saying they were unconcerned about the issue. Similarly, 43% of respondents claimed they were most likely to vote Republican compared to 33% likely to vote Democrat regarding woke ideologies in schools. Twenty-three percent of respondents said the issue wouldn’t effect their party preference.

Sixty-seven percent of Americans approve of low-level marijuana-related pardons though results showed no swing in either direction for voters.

Respondents were split on the Biden administration’s policies on Ukraine while a majority appeared supportive of providing aid for the country. Fifty-nine percent of Americans responded they would support NATO intervening in the conflict should Russia deploy nuclear weapons on Ukraine. 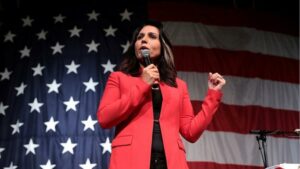