Over the weekend, Prime Minister Scott Morrison conceded defeat to Labor Party candidate Anthony Albanese. Morrison will also step down as the head of the Liberal-National Coalition which he has led since 2013.

Climate change, COVID-19, China’s authority in the region, and the nation’s high cost of living were the campaign’s focus leading up to election day on May 21. The media scrutinized the candidates’ personalities, with Morrison being cast as brusque and a self-described “bulldozer” at times.

“We hand over this country as a government in a stronger position than when we inherited it when we came to government [in 2013],” Morrison said to his supporters in Sydney on the evening of the election. “We leave government, having secured our borders many years ago, and we leave government having restored our nation’s defenses.”

“As a result I will be handing over the leadership at the next party room meeting, to ensure that the party can be taken forward under new leadership,” the prime minister said. “It’s a night of disappointment … but it’s also a time for coalition members and supporters all across the country to hold their heads high. We have been a strong government. We have been a good government. Australia is stronger as a result of our efforts over these last three terms.”

Prime Minister-elect Albanese spent much of his campaign promising to improve Australia’s free health care system and to support the LGBTQ community.

“Tonight, the Australian people have voted for change,” Albanese said during his victory speech. “It says a lot about our great country that the son of a single mom who was a disability pensioner, who grew up in public housing down the road in Camperdown, can stand before you tonight as Australia’s prime minister.”

Thus far, the Labor Party has not secured the needed 76 seats in the House of Representatives to form a collation government. As of May 23, 73 seats had been called for the party – leaving them just shy of the minimum.

The Liberal-National Party secured 54 seats while 15 went to alternative parties. With roughly 73% of the votes counted and 9 seats undecided, Albanese’s party still has the chance to form a government.

According to Reuters, the fate of the Senate will remain unknown for several weeks. The 76 seats are split between the 14 regions of Australia – with each of the six states receiving 12 and the two territories each getting two.

Alongside four other senior ministers, Albanese was sworn in on May 23. He is the nation’s 31st prime minister. 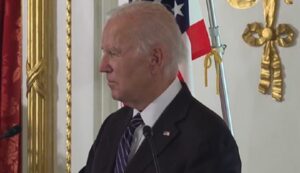 Biden Says US Would Militarily Intervene to Defend Taiwan, White House Rushes to Walk it Back